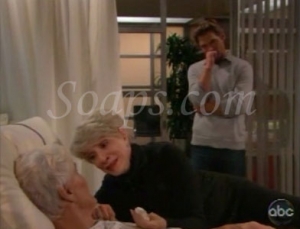 It’s weird to think this will be my last “All My Children” blog until who knows when. At least progress is being made in terms of Prospect Park securing some of the cast  for the online era of Pine Valley. This past week has been one of great emotion as we’ve seen some favorites return and certain storylines resolve themselves. Without further ado, let’s get to dissecting what happened during the last week of “All My Children” as we know it.

Family tributes.
I’m not gonna lie, I hated the Kane family tribute on Tuesday. I didn’t feel there was anything of consequence happening and the characters breaking the fourth wall was jarring. That aside, I loved the Hubbard, Martin and Chandler episodes. Something huge happened in each of their tributes: Angie got her sight, Lucy and Maya back; Tad and Dixie got engaged; Joe, Ruth and Jamie returned; Stuart was revealed to be David’s patient and alive; Adam came home to confront JR; and JR saw a vision of Babe, which was heartbreaking and sent him into a deeper downward spiral. There were tons of great tissue worthy scenes – even if Stuart’s resurrection was a bit on the sappy side – and wonderful flashbacks.

David.
While I would have been grateful to David for saving my loved ones, I would be pissed he kept me in the dark for so long. Look how quickly Adam’s presence saved Stuart. It seems like someone should have mentioned that in between pats on the back. And I’m still not sure to what extent David’s involvement with Zach’s shady casino partners was, but I can overlook that as the writers were sort of on a deadline. I love David, but after all the bad he’s done, I’m not sure he should get off so easily. However, I have enjoyed how touching he’s been with Cara. Now that we know Lindsay Hartley plans on migrating online, I pray to the soap opera Gods that Vincent Irizarry follows suit so we can see their story play out. Besides, Pine Valley will still need a good villain.

Erica.
I like the way Erica’s arc ended, for now anyway. Like Zach, I don’t think Erica should give up her dreams. As she is so fond of saying, she’s Erica Kane! If anyone can have it all, it’s her. I was happy she made an attempt to include Jack in her L.A. life, but apparently Jack doesn’t give a damn. Despite liking that Erica was staying true to who she was, while realizing she needed Jack, I loved him standing up to her like that.

Seeing vampires.
Sarah Michelle Gellar and Eva La Rue's returns were cute, especially with the references to Sarah's character seeing vampires and declaring she's Erica's daughter, but the scenes weren't connected to anything happening onscreen. I love that the actors wanted to pay tribute. I just wish the writers could have figured out a way to weave them into a story that was happening that day and not made them so stand-alone.

Looking forward.
I'm torn about the cliffhanger ending. It's kind of exciting that not everything got wrapped up neat and tidy and it gives us something to look forward to. However, it was much darker than I expected and I'm not sure I buy JR being that vengeful. Or maybe I just wanted more for his character. I mean, who is he so angry with he feels the need to kill them? Although, we didn’t see him pull the trigger, so it could have been someone else. Part of the cliffhanger I guess. I also love that they didn’t reveal who David's other patient was. It hopefully gives the writers for the online version a starting point.

Even though I teared up quite a bit this past week, I’m not sad "All My Children" is going off network TV. If Prospect Park hadn't bought the rights to the show ABC no longer wanted with the intent of putting it online, I would be. But they did and will hopefully breathe new life into the 41-year-old soap opera. I'm going with the assumption that the online version will happen. It might not be the show we've been watching for decades, but if more of the cast follows Cameron Mathison (Ryan) and Lindsay Hartley's (Cara) lead, it could be just as good if not better. Who knows what freedoms the Internet will give the series that network TV restricted them with. I'm excited by the groundbreaking nature of this move and love that two soap operas are paving the way for Primetime and independent TV shows to follow suit. It's an exciting time and soap operas are at the forefront. Pretty cool and something to celebrate in my book.

Thank you for letting me voice my opinions here even though some of you haven't agreed with me. I've enjoyed reading your thoughts and counterpoints as well. As we wait for "All My Children" to resurface online, Soaps.com will continue to post news on the show's development and actors' new projects. So check back often!

What are your thoughts on the finale? Feel free to share them below and don't forget to vote in our  All My Children Poll: Most Memorable Storyline.

Poll: What Will You Watch In Place...