All My Children Poll: Favorite Couple 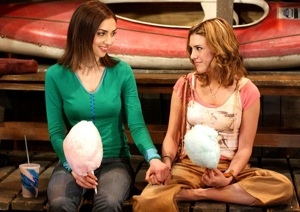 Love in the afternoon.

As All My Children enters its last week on network TV before it heads online, Soaps.com is taking a look back at the many unforgettable characters and relationships we’ve enjoyed along the way. We’ve already revisited the dastardly villains who terrorized the residents of Pine Valley, now we’re looking at the popular couples who heated up the small screen for the past 41 years.

You can’t have a soap opera without some serious romance and “All My Children” has featured many unforgettable pairings over the past four decades. Phil (Richard Hatch) & Tara (Karen Lynn Gorney) enjoyed some loving during the series’ beginning in the 70s and viewers were first introduced to early super couple Cliff (Peter Bergman) & Nina (Taylor Miller), who had her disapproving father Palmer (James Mitchell) to contend with. The first decade also produced Erica (Susan Lucci) and Brooke’s (Julia Barr) first battle over a man when they both vied for Tom’s (Richard Shoberg) affections.

Young love flourished in the 80s, as viewers were introduced to star crossed lovers Jesse (Darnell Williams) & Angie (Debbi Morgan) and Greg (Laurence Lau) & Jenny (Kim Delaney), who both had to battle their parents to be together. Pine Valley was also entertained during this period by fun loving Nico (Maurice Benard) & Cecily (Rosa Nevin), as well as odd couple Trevor, a.k.a Uncle Pork Chop (James Kiberd), & the more refined former gold digger Natalie (Kate Collins). The latter of whom helped usher in the next decade of romance.

During the beginning of the soap’s fifth decade, Erica continued her 20 year long on again/off again relationship with Jack (Walt Willey), while Brooke and Adam (David Canary) finally got their happiness as they rode off into the sunset together. It even seems David (Vincent Irizarry) may just have found redemption in newbie doctor Cara (Lindsay Hartley).

Of course, other couples have left their mark on Pine Valley over the years as well. Who has been your favorite? Vote and comment below.