All My Children’s J.R. Martinez’s Week One Dancing With The Stars Video. (Updated.) 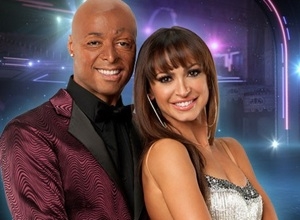 J.R. Martinez was deemed safe and will be moving on to the second week of “Dancing with the Stars” with partner Karina Smirnoff. Ron Artest, a.k.a. Metta World Peace, was the first contestant eliminated.

During the first week of season 13 of Dancing with the Stars J.R. Martinez (Brot) danced the Viennese Waltz with Karina Smirnoff. And the judges were impressed. Len told him it was just right and one the best performances of the night. Bruno couldn’t believe how well he did for having never danced before, but suggested he clean up his lines. Carrie Ann was touched by his performance and his ability to bring emotion to the dance so early in the competition.

J.R. and Karina received an 8 from Carrie Ann, a 7 from Len and a 7 from Bruno. Their total score of 22 landed them at the top of the leader board tied with Chynna Phillips and Tony Dovoloni. For the full recap go to Soaps.com’s sister site Reality TV Magazine Dancing with the Stars Recap Season Premiere.

Soaps.com agrees with the judges that J.R. looked confident and emotional as he hit the dance floor. He definitely showed a lot of promise for what’s to come. What did you think of J.R.’s first dance? Watch the video and share your thoughts below.

If you haven't already, read Soaps.com's interview with J.R. Martinez. Join us on Twitter @soapoperafan, and Facebook. Come tweet and Facebook with us about "All My Children," all the other soap operas, "Glee," "Grey’s Anatomy" and "Vampire Diaries!"