All My Children Poll: Favorite Villain 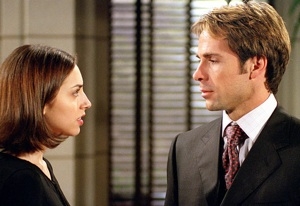 As All My Children ends it 41-year network run before migrating online, Soaps.com is taking a look back at the many great characters the show has given us over the years. First up on our list are villains. Pine Valley has certainly had their share of bad guys over the past four decades, so there’s a lot to choose from.

The early days of the 70s gave us Palmer Cortlandt (James Mitchell), who went to great lengths to protect his daughter Nina (Taylor Miller) and generally get whatever he wanted over his decades’ long run in Pine Valley. During this time, viewers were also introduced to slimy pimp Billy Clyde Tuggle (Matthew Cowles), who would resurface many years later to torment Dixie (Cady McCain), and Ray Gardner (Gil Rogers) Tad’s (Michael E. Knight) abusive biological father, who had it out for the Martins.

As the show’s first decade gave way to the 80s, Pine Valley welcomed long running tyrant Adam Chandler (David Canary), who much like Palmer, did whatever it took to get his way, including locking Dixie away in a loony bin many years later so he could have custody of their son JR (now played by Jacob Young). The Baxter family was also introduced, which gave Pine Valley Les Baxter (Antonio Fargas), Angie’s (Debbi Morgan)
father and crime lord Mr. Big.

When the 90s rolled around, viewers began their long relationship with Janet From Another Planet (Robin Mattson/Kate Collins), who most famously threw her sister down a well and took over her life. David Hayward (Vincent Irizarry) also came to town during this decade. His list of misdeeds over the years is almost too long to list, but they include drugging, manipulating and almost killing half the town. Of course, he’s saved many of their lives as well. The apple didn’t fall far from the tree, as David’s mother Vanessa (Marj Dusay), who turned out to be crime lord Proteus, visited Pine Valley at the end of the 90s just in time to usher in the next decade with her villainous reign of terror.

As Pine Valley entered its fourth decade, Michael Cambias (William deVry) entered the scene and horrifically raped Bianca (then played by Eden Riegel) in the early 2000s. In addition, his father, Alexander Cambias Sr. (Ronald Guttman), was eventually revealed to be the Satin Slayer, who killed a few of the Fusion women. Then there was Ryan’s (Cameron Mathison) younger brother Jonathan (Jeff Branson), who terrorized the women in town and killed his brother Braden (Zen Gesner/Joseph Murphy) before being diagnosed with a brain tumor.

During its last year and decade on ABC, “All My Children” introduced us to Ricky Torres (Eddie Matos) in 2010 – 2011. The fake reverend was responsible for trying to kill Zach Slater (Thorsten Kaye) and stalking Kendall (Alicia Minshew).

This of course is just a sampling of the bad guys and gals who have passed through Pine Valley. Who has been your favorite villain? Vote and comment below.

Alicia Minshew Joining All My...