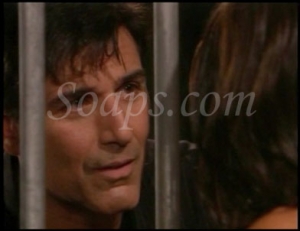 As we begin the final week of “All My Children’s” run on ABC, many questions abound. Last week left us with many things to ponder, that may or may not get answered before the show heads online. Let’s get to it.

What about David?
There’s so much happening that involves him it’s hard to know where to start. What other former Pine Valley residents has David saved, but is keeping from their loved ones? Will he go to prison? Will Cara let him be a father to his child if he doesn’t? There’s just so much going on with him I’d hate to see the character not transition online. He has been so wonderfully complex lately as evidenced by his being tender and heartbreaking with Cara one minute, yet cold and taunting with JR the next. I also loved the vulnerability he showed with Angie. I hate that he was involved in the whole Zach and his casino partners’ debacle from the beginning, which seems to be a contrived way for David to pay for all his sins. He’s someone we love to hate and even love sometimes and we can’t do that if he’s behind bars. If you haven’t already, read our Soaps.com’s interview with Vincent Irizarry to find out the actor’s thoughts on his alter ego.

Is Babe alive?
It’s hilarious to me that JR refused to believe Dixie’s assumption that Babe could be alive. He was talking to his twice thought to be dead mother. Not to mention, Zach just returned from the dead, as has Greenlee, Maria, Tad and countless others in Pine Valley. Regardless, JR started to believe it could be true and confronted David. Next week, Alexa Havins returns as Babe, but we don’t know in what fashion. Will she be alive or will she visit JR as a vision/dream like Gillian and Leo did their former loves? I don’t know, but I’m actually really glad I don’t. There are little to no spoilers about what will happen next week, which makes the final network week all the more exciting.

Will Erica and Jack get married?
I'd really like to see this happen since Erica has been leading Jack on for some time now. Since it doesn’t look good regarding Susan Lucci joining the show online, I'd like to see her and Jack get their happy ending. In real life, Erica would have left the sleepy little town of Pine Valley years ago, but since this is a fictional world, I hope Erica either chooses Jack and stays put, or they move to L.A. together to make her movie.

What's up with Adam?
Brooke returned last week and while we didn't see Adam yet, she assured a doubting Erica that he was in town as well. I loved the women falling into their trademark bickering, but I wasn't too keen on their sudden warm and fuzzy about face mid-snarkfest. So, I was happy it ended on a bitchy note of Erica telling Brooke she would not be in her movie. That's who those women are. I don’t need to see them be friends. What was even more intriguing though was Brooke evading Erica's questions about Adam. She did admit Adam hasn't been the same since he left town though and I can't wait to find out why next week.

Odds and ends.
I loved Zach pretending to be more interested in a hockey game than in Kendall. He even pulled out a Red Wings Snuggie! I could not have loved that more. I'm thrilled they are happy, but I'd like to see them discuss her feelings for Griffin at some point.

Liza and Caleb? Kind of out of nowhere and I don't see much chemistry there, but I suppose they needed to wrap up their characters somehow. I was glad to actually see Caleb and Asher again though. And happier than I thought I'd be that Asher and Colby might have a future.

I was really touched by Angie and Jesse's scenes. I didn't love the over the top baby switch storyline, but their recent toned down performances (especially Jesse's) have redeemed it for me.

The In the Middle of the Night episode was filled with really good two person interactions. Even though it wasn't the most exciting or forward moving episode, it said a lot about all the characters featured.

Alicia Minshew Joining All My...