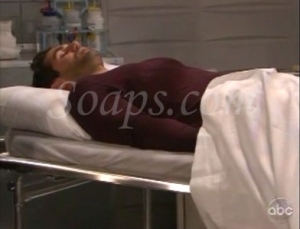 Lori’s “All My Children” Weekly Wrap Up For September 5 – 9:

The Orpheus storyline kicked things up a notch last week, ending with a major cliffhanger. A few other things happened as well, including Erica getting a surprise in L.A., so let’s get right to it.

The Sting?
The Ryan/David/Zach standoff came to a head on Friday when Griffin was revealed to be killed by Zach and a gun went off after a struggle between Ryan and Zach. It was designed to be a shocking cliffhanger, but I have a sneaking suspicion all is not what it seems. I have no idea what will happen, especially since the spoilers “All My Children” has been releasing lately are sparse to say the least, but here’s my theory: Since Zach and Ryan have been so over the top lately and David seems genuinely appalled by Zach’s behavior, not to mention I don’t believe they would kill off Griffin or ruin Zach’s character in the last few weeks of the network run, I believe it’s all a ruse. Ryan, Griffin and Zach staged this elaborate plan to teach David a lesson about playing God or to trick him into confessing something. Again, just speculation on my part. What do you think is going on?

Character development.
It’s nice to see David being played as more of a well-rounded character instead of just a one dimensional, egomaniacal, control freak. The mystery surrounding Orpheus is intriguing and makes us all question David’s evil genius status, but his vulnerability with Cara and Angie humanizes him and makes us care about him. I’m really happy they’ve pulled David back into the forefront as “All My Children’s” network run wraps up, especially after he was mostly back burnered for the last year. I’d love to see David continue with the show online especially now that Cara is pregnant. They have a lot of potential for coupledom and as I mentioned last week, it’d be interesting to watch David finally get to be a real hands-on father. I can only imagine all the scheming and manipulating he’d do in the name of his new progeny. What do you think about this development? Vote in our All My Children Poll: David and Cara as Parents.

Head scratcher.
I'm still not really sure what the point of Erica searching for Mike Roy was. She could have gone to L.A. to meet the movie producer for her book signing alone. There didn’t need to be the added wrinkle of Mike Roy thrown in there. And I'm confused as to where they are going with Erica now. The producer, Kit Sterling, pumped Erica up with platitudes about living the life she was meant to, or something like that. It made me think it was just one more thing to pull her away from Jack. Or will Erica choose Jack in the end instead of what Kit is offering? Maybe she can have both? Who knows, but the bigger question is, who did David save that Erica loved? I can't imagine it's Babe he's referring to. Could it be Stuart? Or unless I'm forgetting someone, could there be a secret return planned?

Odds and ends.
Dixie and Tad's chicken suit call back was cute and filled with history, but they don’t grab me as a couple, so it was just filler to me. I felt the same way about Carol Burnett's return and Opal getting together with Sam. Actually, I was concerned that Opal just decided to go to Hawaii with a man she hadn't seen in decades. Who knows what kind of person he is now.

It was nice to see Scott and Madison again, but I wish we'd have seen more of them over the last few weeks.

Amanda and Jake were sweet together and it looks like they'll get their happy ending by September 23. At the rapid rate things are going, they'll probably have adopted a baby by then.

Angie had her surgery and will probably have her sight back in no time, but I would have liked to have seen her dealing with Jesse's betrayal a little more last week.

Kendall and Zach got some lovin' in and while I really like Zendall as a couple and enjoy their romance, their actual love scenes never do it for me. I wonder what kind of sparks Kendall and Griffin could have created.

With only two weeks left of "All My Children" on ABC, I look forward to the many returns on tap, the Orpheus storyline coming to a head and the big cliffhanger designed to set up the online transition. While we wait for all that, what were your thoughts on last week's "All My Children?" Feel free to share them below.

All My Children Alum Mary Fickett...