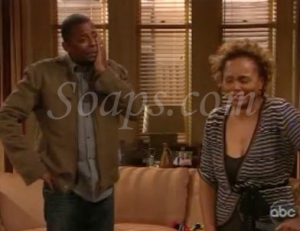 Lori’s “All My Children” Weekly Wrap Up For August 29 – September 2:

I can’t believe there are only three weeks left until “All My Children” goes off ABC. I know it will eventually resurface online, but it’s still an ending which will be felt. Time is running out for Pine Valley as we know it and a couple of story points came to a head last week, while a few others pressed on. Let’s get to it.

Mining the past.
They had to give Erica something to do in her final weeks leading up to the network end, but killing Mike Roy off with a throwaway line only to make Erica investigate whether or not David brought him back from the dead seems a bit contrived. I admit I don’t much remember Mike and Erica’s romance, but I would think resurrecting Travis’ memory would be more relevant since he was Erica’s husband, Bianca’s father and Jack’s brother/rival. Since they are going down this road though, it would be nice if Erica let Jack help her find Mike so that they might enjoy some happiness and romance along the way before September 23. Time’s a wasting and there hasn’t been much love between Jack and Erica since she returned from Jane’s captivity.

Cold turkey.
It’s hilarious that JR is going around declaring that he’s sober now. It’s been like a day. I wish I could kick my pop habit so easily. I’m not too invested in how JR manipulates things in order to get AJ back, so they really need to bring Babe back soon to make me care what happens to him in the final weeks. Since Jacob Young is returning to The Bold and the Beautiful, I wonder if he will ride off into the sunset to start over with his true love and their son far away from Pine Valley. Or, maybe he’ll return to Africa with his brother Jamie to try and redeem himself. What do you think will happen for JR?

Confession time.
Jesse finally broke down and told Angie the truth about Lucy and Ellie. It was difficult to watch Angie painfully sob as she processed the fact that she was losing two children in one day. She quickly pulled it together though and gave the baby she thought was hers to her birth mother Maya. I'm not sure I buy Maya's complete understanding of what Jesse did, but the bigger question is how can Angie ever forgive her husband? It was kind of hinted that's where she was headed at the end of Friday's episode. I understand they need to wrap some things up quickly, but this is a pretty big leap to make. Again, since Debbi Morgan is going to The Young and the Restless, I wonder how Angie's story will end. Could they possibly recast her online, or will she not forgive Jesse and actually leave him? Or, will the Hubbards leave together?

Pent up rage.
Angie really brought it with her pain, but Tad was just as impressive in his anger. You could feel the old hurt coming back when he yelled at Dixie after catching her with David. We usually see him joking around and dispensing sage advice. His testy side is something usually reserved for JR, but Dixie kind of deserved it.

Secrets.
I'm more convinced than ever that Zach has his own plan where David is concerned. I could be wrong, but the "secret" he told Kendall off-screen and his declaration to Erica that he had it all under control led me to believe he is snowing everyone. I'm just not sure what happened to Griffin after he was tricked into meeting Zach at David's secret lab. My guess is that he clued Griffin in on what he's up to and they are now working on the same side. That's just my hunch though. What do you think? Vote in our All My Children Poll: What Happened to Griffin?

Medical crisis?
Cara fears her cancer has returned, but I have a feeling something else is afoot. Anyone else think she's pregnant with David's baby? That would be a good cliffhanger until "All My Children" returns online. With David's vulnerable side showing more these days I'd really like to see him as a father.

Aside from enjoying Agnes Nixon's guest appearance, that's it for me this time around. What did you think about last week's "All My Children?" Feel free to share your thoughts below.