All My Children’s J.R. Martinez To Dancing With The Stars. (Updated.) 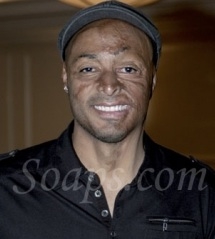 The next mirror ball trophy winner

J.R. will dance with Karina Smirnoff, who has previously been paired with Ralph Macchio, Mike Sorrentino (The Situation), Aaron Carter, Mario Lopez (ex-Christian, “The Bold and the Beautiful”), Billy Ray Cyrus and others. Karina has yet to win the coveted mirror ball trophy. Could J.R. be the celebrity partner who helps her finally achieve that accomplishment?

It has been confirmed. J.R. Martinez will compete on “Dancing with the Stars.” The reality show kicks off season 13 on September 19 at 8.00 PM EST. Who’ll be watching?

For a full list of dancers go to Reality TV Magazine’s Dancing with the Stars Final Cast List.

Soaps.com’s sister site Reality TV Magazine is reporting that the Dancing with the Stars season 13 cast list has been leaked. The official list won’t be confirmed until after tonight’s episode of Bachelor Pad 2 on ABC at 8.00 PM EST, but in the meantime the “leaked” list includes a name familiar to “All My Children” fans: J.R. Martinez (Brot).

Read Soaps.com's interview with J.R. Martinez. Join us on Twitter @soapoperafan, and Facebook. Come tweet and Facebook with us about "All My Children," all the other soap operas, "Glee," "Grey’s Anatomy" and "Vampire Diaries!"