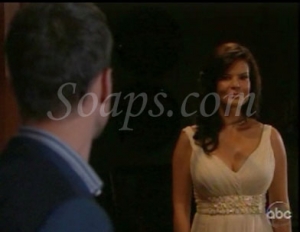 While I’m still loving “All My Children” these days, I found myself mostly on a rant this week. It’s just nitpicking really, but there were a few things that bothered me about last week’s show. Let’s get to it.

Going out with a bang.
Jacob Young recently confirmed he is returning to the Bold and the Beautiful. That obviously means the actor won’t be following “All My Children” online, but it remains to be seen if they recast the role. Whatever happens, the character isn’t going quietly in the night, as he is in full on destruction mode trying to destroy Marissa for her perceived betrayal. I like that he’s still front and center and that he hasn’t turned into a complete good guy before the network end, but I’d like to see him use his energies to battle his cousin Scott instead of, or in addition to, his ex. There was so much promise when Scott returned from prison for a great rivalry between him and JR, but that never really went anywhere. In fact, Scott is hardly ever seen anymore. One of the very few things I’m unhappy about with the show lately.

Sugary sweet.
Speaking of Marissa, her relationship with Bianca has really taken off. The instant girlfriends are very lovey dovey and are even thinking about moving in together already. While it’s great that they’re happy, they’re a bit much for me. There needs to be some conflict or a secret that could threaten to come between them. Anything to cut some of the saccharine. Sure, there’s JR’s agenda against them, but I only see that as bringing them closer, which I’m not sure I can stomach. What do you think of them as a couple? Vote in our All My Children Poll: Bianca and Marissa.

Another blast from the past.
After much anticipation, Gillian returned. I found it odd that there were no previews teasing the fans about it. It wasn't even hinted at in the previews Soaps.com receives from the network. After watching the episode I understood it better because it was kind of a huge letdown. Greenlee and Leo's dream reunion lasted a whole episode after being teased about for weeks. In contrast, Ryan's reunion with the love of his life lasted one brief scene after barely any build up. The only tease we got was an episode or two before he "saw" her. When he did, they both said "I love you" and then "Goodbye." I found it strange because it's not like he had been harboring any angst about her over the years, or even the past couple of weeks. I know they wanted to honor that relationship and give something to the fans, but the scene just seemed thrown in there. His flashbacks to his time with Gillian were much more appreciated. Maybe if he had been having those flashbacks before he felt the sudden need to let go of his long dead wife, it would have made more sense.

Off-screen bliss.
Another sort of out of nowhere scene was that of Natalia and Brot. I know Natalia isn't a regular character anymore, but a one-sided scene or two of Brot talking to Natalia on the phone or mentioning their off-screen visits would have at least kept the couple on our radar. One scene dumped in the middle of an episode that otherwise had not much to do with them, didn't help in making me feel the love.

Mob of zombies.
While Dixie tries to remember what went on during her time under David's care, Zach is dead set on alienating everyone in town by backing the man who brought him back from the grave. I don't know about you, but I would probably pledge my allegiance to someone who saved my life too. Sure David has an agenda, but instead of being appreciative that he brought their loved ones back, most of Pine Valley is attacking David and accusing him of brainwashing Zach. I, on the other hand, suspect Zach has an ulterior motive for his sudden devotion to David. Just a guess though. What do you think?

Aside from looking forward to the fallout from Jesse's confession to Tad about Lucy, that's it for me this time around. What did you think about last week's "All My Children?" Feel free to share your thoughts below.

All My Children Stars React To Last...