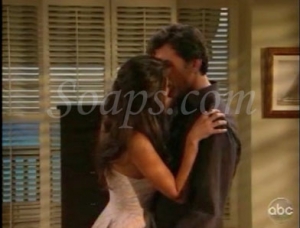 It was another interesting week in Pine Valley, as more twists and turns were thrown at us. Most of the new developments fueled my current excitement for the show and further heightened my anticipation of how things will wrap up before “All My Children” migrates online in 2012. So, let’s get to it.

A new pairing?
While I’m pretty ambivalent when it comes to Tad and Dixie as a couple, I am glad they are reuniting because it is allowing Cara to get sucked into David’s orbit, which I am loving so far. I liked Cara with Tad, but putting two morally good and decent characters together isn’t exactly electrifying. Putting a good girl with a bad boy? Almost always a recipe for success. I’m already feeling their chemistry and am looking forward to seeing what unfolds between the two this week. What do you think? Vote in our All My Children Poll: David and Cara.

Speaking of David…
We’re seeing more and more glimpses of his vulnerability shine through lately, which I’m hoping is not an act. He showed a softer side to Angie when he talked about his father and to Cara when he admitted he cared what people thought of him. He’s done a lot of bad things in the name of love, acceptance, ego, or however else he justifies his actions, and I don’t want him to turn all vanilla good guy on us, but I don’t want him to be an absolute villain in the Project Orpheus storyline either. Dixie has a visceral reaction to the mere mention of David’s name, but in the story I’ve crafted in my head, her brain is still jumbled from almost dying and her instincts are just off.

All about Greenlee.
Did she learn nothing from keeping Madison’s pregnancy a secret from Ryan? When the truth came out it almost destroyed her non-legal marriage to him, but for some reason he forgave her. Now, she wants to keep David’s taunts about Gillian being alive from him too? And why? Because she’s afraid she can’t compete with the love of Ryan’s life and she doesn’t want to throw another hurdle in the path of their relationship. Greenlee’s selfish behavior doesn’t usually faze me, but I found myself actually getting angry at her for keeping yet another secret from Ryan, especially after she went searching for Leo. But I guess she is the only one allowed to be reunited with the love of her life.

A rocky reunion.
Zach's back, but it's not exactly smooth sailing for him and Kendall right now. Not only is Zach unhappy by his wife's closeness with Griffin, but on Friday, he declared he would stand by David because he saved his life. Although, I wonder if it's just part of the plan Ryan pitched to him regarding bringing David down. I'm crossing my fingers that won't be the case because an alliance between Zach and David would add another fascinating layer to this storyline. It's also bound to create tension between Kendall and Zach. Which is actually a good thing because it would be boring to just watch them be all lovey dovey.

Taking the leap.
Bianca and Marissa consummated their relationship last week. I found it interesting that experienced lesbian Bianca was the nervous one while first timer Marissa was confident and raring to go. I thought it would have been the other way around. That aside, it's nice to see them happy and I like them well enough as a couple, but I don't necessarily buy their love scenes.

Lashing out.
JR continued his downward spiral when he tried to bribe the judge to award him custody of AJ. Of course it backfired and JR declared he wouldn’t let a pair of lesbians raise his son. That was so JR of him and something a bitter, jilted ex would probably say in real life. Despite his anger and hatred at the moment, I can't help but still pull for him. Maybe when Babe returns, either as a dream or raised from the dead by her father, he'll finally pull it together.

A happy place.
Amanda woke from her surgery talking about happiness, love and the beautiful place she visited while she was unconscious. I have no idea what all that will lead to, but for now it's just nice to see her and Jake happy and in love without the threat of Cara coming between them.

Aside from being thrilled that they abruptly sent Mookie packing, that's it for me this time around. What did you think of last week's "All My Children?" Feel free to comment below.

People Magazine Celebrates All My...