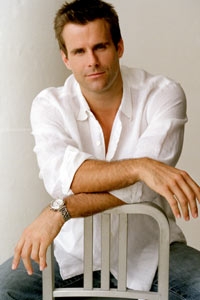 If you were looking forward to getting a gander of All My Children’s Cameron Mathison during the June 8th Lakewood BlueClaws game in Lakewood, NJ, you’re out of luck.

Mathison had to cancel his scheduled appearance at the baseball game due to a conflict with new obligations with Style Network.

However, Mathison, who apologized for his cancellation, saying it’s really not like him to bow out of a commitment, but in this instance his hands are tied, won’t be leaving his soaps fans out in the cold. He has given the BlueClaws a script, autographed by the entire cast of All My Children to be given away. Fans can sign up at the game to win the script; someone will be chosen as the lucky winner during the game.

In the meantime, the BlueClaws have brought in a pinch hitter for the missing Mathison. General Hospital’s Jason Thompson will be throwing out the first pitch, and then will be on hand to sign autographs and pose for pictures approximately two hours into the game.

Part II of Soaps.com's Chat with...

All My Children's Head Writers...