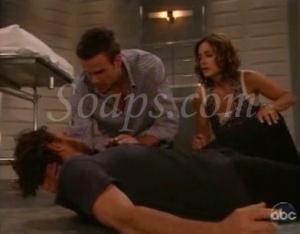 Back off lady. (Soaps.com)

As the Project Orpheus storyline continues to unfold, we’ve been treated to some nice payoffs, while more of the mystery and anticipation builds. The only missteps for me lately are the Maya/Mookie storyline and Marissa’s completely unfazed reaction to learning her father was bringing people back from the dead. I thought it garnered a bit more shock than she relayed, but otherwise, I’m loving everything “All My Children.” Let’s get to it.

Zach’s back.
And it was so good to see him. He’s been missed. I found it interesting that Greenlee saw the scar on his arm and wondered how David pieced him back together. Is Zach a modern day Frankenstein’s monster? I hope it doesn’t get that weird and it’s just that David somehow miraculously found Zach after the explosion and kept him alive. It was also funny that David got upset with Greenlee for not handling her seclusion with Zach properly. He explained to his ex-wife that he locked her in with Zach so he’d have a friendly face to wake up to. Uh, David? You might have wanted to clue Greenlee in that Zach was actually alive before putting her in a Leo-filled, drug induced state where upon she woke up and saw the living dead. Perhaps the best thing about Zach’s return, aside from him actually returning, is that he showed up on Monday and Kendall saw him on Friday. There were no zombie-like runs through the park or writhing around in his bed for weeks on end. I know it’s probably due to the September 23 ABC deadline, before the show migrates online, but I wish all soap stories could clip along this quickly.

Snapping out of it.
It was amazing how after Dixie saw Tad she returned to normal. Sure it took a scene or two, but thankfully she stopped talking like she was just learning the English language and she even got her memory back. Ah, the power of love. It's good to see her finally interact with the people who love her instead of creeping through the woods scarfing down donuts. I liked that JR didn't immediately accept that Dixie was his mother, suggesting instead that Tad teamed up with David to trick him. In Pine Valley, it's certainly possible. He then referred to Dixie's last return from the dead, which in real life would sound ridiculous, but on a soap it's perfectly acceptable. I love that they are ending their network run by crafting their farewell story on one of the biggest soap clichés, which the characters verbalize on a daily basis. It not only explains all the returns in one exciting story, but it's also like one big inside joke, which the audience is in on. What do you think? Are you enjoying the back from the dead umbrella storyline? Vote in our All My Children Poll: Project Orpheus Arc.

Taking the high road.
Despite Tad's declaration that nothing will change between them, Cara moved out so her husband could figure things out where Dixie is concerned. I like how she's being played in this situation and totally feel for her. Even better though, I'm seriously intrigued by what's to come for Dr. Cara Castillo. Check out the All My Children spoilers for hints of what's in store.

A mother's love.
Despite their rocky relationship and Janet's craziness, Amanda needed her mom before she went in for a hysterectomy. Janet actually came through for her and acted like a normal mother by comforting Amanda in her time of need. The parting shot of Amanda curled up in Janet's arms was pretty emotional and a satisfying end to Janet From Another Planet's brief return.

Neat and tidy.
Jane reappeared briefly to take the rap for stabbing David in order to make up for all she put Erica through. It was a quick way to deal with Erica's crime without spending too much time on clearing her name. Because let's face it, we can't have Erica Kane in jail or engaged in a drawn out legal battle during "All My Children's" last few weeks on ABC. Hopefully she will have more fabulous things to do.

That's it for me this time around. What did you think about last week's "All My Children?" Feel free to share your thoughts below.

All My Children Weekly Spoiler...