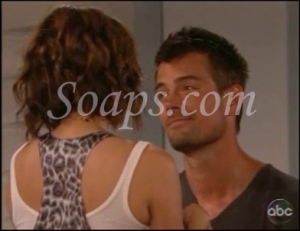 Out of the loony bin. (Soaps.com)

I can’t express enough how much I loved last Friday’s episode of “All My Children.” Most of the week served as build up to what unfolded, so let’s just get right to it, shall we?

A perfect fit.
How great was Leo’s return? Even though I started to guess he wasn’t real when he immediately remembered everything and was perfectly ambulatory, unlike Zombie Dixie, it didn’t take away from the romance of the scene. I was surprised by the mad chemistry that still existed between Josh Duhamel and Rebecca Budig and the big screen star’s ease at transitioning back to Daytime. It was like he never left. I feel like they are a couple who truly gets and appreciates each other and I teared up as they recalled their past together. It’s too bad Josh has such a successful post Daytime career because Leo and Greenlee are a couple I could watch for years to come.

The great escape.
Oak Haven continued to be a source of great comedy last week. It started with Erica seeing Dixie, which led to Janet using her feminine wiles on orderly Ralph to help her new friend for life Erica get in to see her. I laughed out loud at the nod to the ridiculousness of Dixie dying from eating poisoned pancakes, as Erica repeatedly told a confused Dixie that’s what they thought happened to her. “Pancakes? No,” a confused Dixie stuttered. I think that was the reaction most of the viewers had as they watched it happen onscreen a couple of years ago. Things just got better from there as Janet showed up at Kendall’s with Erica on Friday. She proceeded to explain to a dumfounded Bianca and Kendall that her taking over her sister Natalie’s life so many years ago made Erica’s story of a look-a-like all that more plausible. Only on a soap does that make perfect sense.

A last goodbye.
Turning a bit more serious, Annie veered off on her own after escaping Oak Haven. She of course high tailed it over to Ryan's so she could see Emma. There was no craziness or bickering, just Annie rationally telling Ryan she wanted to say goodbye to Emma one last time before she went off to better herself. The scene made me really miss Annie and wish she would have stopped by JR's on her way to a new facility, since Janet burned Oak Haven down.

Lonely hearts club.
I feel pretty bad for the Castillo siblings since Dixie's and Zach's return means their romances are doomed. It was nice to see Cara finally let go of Jake and develop real feelings for her green card husband. Now that Dixie is back though, who will she turn to? Jake is busy recommitting himself to his wife and Griffin is her brother, so who does that leave? According to Lindsay Hartley (Cara) at the All My Children Fan Club Main Cast Event, she hinted there could be a new man in her life by September 23. But what about Griff? Maybe he can have a fling with Maria.

Cliffhangers.
Aside from all the other great soapiness of Friday's episode, we were also treated to two exciting cliffhangers. Sure we knew they were coming, but leaving us in anticipation after seeing Dixie stumbling upon Tad and Greenlee seeing an alive Zach was pretty classic. Today's episode has been set up to be another must see.

Two more big returns.
Some big news came down last week. First, Sarah Michelle Gellar (ex-Kendall) will be returning before September 23, but not as Kendall. As someone new. Although it appears she'll be in scenes with Maria, I liked her idea of just doing a cameo as a patron in a bar. Seeing her cross paths with Kendall at Krystal's or ConFusion would be a nice wink to the audience. Next, Gillian is on her way back. After seeing how beautifully done Leo and Greenlee's fantasy reunion was, I'm a little more excited about Esta TerBlanche's impending return. I hope it's another dream/fantasy sequence, as Ryan sees his long lost love one more time. Because, come on. How many people can David resurrect from the dead? Besides, her heart was transplanted into someone else. I suppose you could argue that David, being the surgeon who performed the operation, used his evil genius and switched hearts or figured out how to artificially keep her alive, but that just might be even more ludicrous than him somehow finding Zach after his plane crashed off the coast of California and keeping him alive for the past eight or so months.

That's it for me this time around. What did you think about last week's "All My Children?" Feel free to share your thoughts below and vote in our All My Children Poll: Favorite Moment From Last Week?

All My Children Weekly Spoiler...