Soaps.com Talks To All My Children’s Stephanie Gatschet 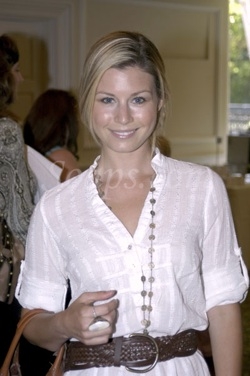 “To get to play someone sort of badass and hardcore was fun.”

As the actors gathered in the green room before the All My Children Fan Club Main Cast Event on July 30, Soaps.com had the chance to talk with Stephanie Gatschet about her last couple of years playing Madison and of course, “All My Children” heading online.

Soaps.com: How are you feeling about the upcoming weeks taping the final episodes of “All My Children” as we know it.

Stephanie Gatschet: It’s bittersweet. It’s very sad obviously to think of it being the end. I don’t know that it’s going to hit me or hit most of us until September, because we’re still working and whatever and it’s hard to imagine after all these years that the show is going to be off the air. We’ll see. There’s a lot of anticipation about what the whole online thing is going to be about. None of us really know what it is yet, so just waiting to see. Hopeful.

Soaps.com: Are you keeping an open mind about following the show online?

Soaps.com: Are you still looking for other jobs as well?

Stephanie Gatschet: Yeah, I’m starting to audition. We have to. I mean we have to operate according to what we know. Just auditioning and working my last little bit of work and we’ll see.

Soaps.com: How long are you taping until?

Stephanie Gatschet: We tape until the end of August. We don’t know our dates yet all the way through.

Soaps.com: Do you know how Madison’s story is going to wrap up in September?

Stephanie Gatschet: I don't know for sure because we don't know anything until we read our scripts a week ahead or whatever. My guess is that probably we're going to have a happy reunion with Scott [Daniel Cosgrove] it looks like.

Soaps.com: I've been disappointed we haven't seen too much of Madison and Scott lately.

Stephanie Gatschet: I know. I know. And it's so fun working with Danny and I've missed it, but there's a lot of old characters coming back on the show and a lot of other storylines to sort of get through in the next month.

Soaps.com: What do you think about Madison's whole Fierce campaign?

Soaps.com: Looking back on your time on "All My Children' what has been your favorite thing about being there and your favorite storyline?

Stephanie Gatschet: My favorite thing about being there is all the personal friendships I've made that I’m going to carry on past all this. And I will always fondly remember my early days on the show as a crazy psychotic…can I say bitch? No, you know, psycho. That was really fun and gave me the opportunity to play, I normally get cast as the sweet girl or whatever. To get to play someone sort of badass and hardcore was fun.

Soaps.com: So then, have you enjoyed your character's progression because she has sort of morphed into that sweet girl.

Stephanie Gatschet: Yeah, yeah, well it's lucky they wanted to keep me around and so in order to do that they had to sort of redeem me in some way. I'm glad that they did so I could stick around and have some more good stories and have romance and all that stuff. And I love a character that starts with the edginess because you never really know when it's going to pop back out.

Read Soaps.com's interview with Christina Bennett Lind and check out the All My Children Fan Club Weekend Photo Gallery. Keep up to date on All My Children and One Life to Live Migrating Online.