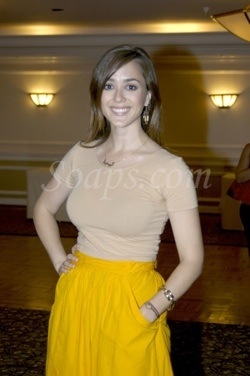 Soaps.com grabbed a few minutes with Christina Bennett Lind as the stars mingled in the green room before the All My Children Fan Club Main Cast Event on July 30. We spoke with the actress, who took over the role of Bianca in June 2010, about her character’s love life, the network end of “All My Children” and what the future holds.

Soaps.com: How are you feeling going into the last month of taping “All My Children” as we know it?

Christina: It’s a little sad. It’s been hard. I think it was harder when we found out about it because it felt so devastating. Now, I think we’ve all sort of gotten used to the idea, but it’s still hard. Sometimes I’m on set and I’ll look up at the lights or something and say, ‘Aww. It’s all going to go dark.’ But I’m also like a real sap, so that’s probably why. It’s been a little hard. It’s been a little hard coming back to know we’re going to start reading our last stuff now, our last stories. It’s you know…I don’t know. It’s a little sad.

Soaps.com: Do you have an idea of how Bianca’s story will wrap up in September?

Christina: I don’t know yet, but I’m hopeful she’ll be happily ever after. That’s sort of my hope.

Soaps.com: Bianca finally has a love interest, which is nice. Are you excited she finally has that?

Christina: I do feel a little bit like, ‘I’ve been waiting so long for it and now it’s over!’ But yeah, it’s really exciting, plus it’s so much fun to work with Sarah [Glendening, Marissa]. I just feel like I get to really work and play off of her and it’s fun. That’s the most important thing.

Soaps.com: Who else have you been working with a lot lately?

Christina: A lot of Susan [Lucci, Erica] and Alicia [Minshew, Kendall], the family sort of thing. I haven’t seen Uncle Jack [Walt Willey] in a while. Mostly it’s been like JR [Jacob Young]. I’ve had so many more scenes with JR than I’ve had in the past.

Soaps.com: You two have had some nice confrontation scenes.

Christina: Yeah. It's sort of letting Bianca be really powerful which I'm sort of grateful for. For me, it's that balance between really open and optimistic and seeing the good in people, but also knowing when to stand up for herself. I like that. That's the Kane in her.

Soaps.com: How does Bianca feel about Marissa? Is she secure in the relationship and trust that she will stick around?

Christina: Yeah. I mean, it feels like because she made such a big leap to come out and try being this person who she is and sort of not fighting it anymore, I think Bianca understands the value of that. But also, she's coming off of a marriage she thought was the end, the one and only. I think Bianca is really treading carefully as well. That they're at this good place is really significant and they're not taking it lightly. So, yeah. It's good.

Soaps.com: Are there any more issues coming up regarding Reese [Tamara Braun]?

Christina: I think there's a little bit coming up, some sort of reminders of her that might be sort of weighty, but other than that no. Bianca is looking forward.

Soaps.com: What about you in terms of looking forward? Are you keeping an open mind about moving online with the show? Are you looking for other things right now?

Christina: We're all kind of in this limbo. They're in talks about it, but none of us know anything. Because it's so soon that the show's ending, it feels like we've all got to sort of keep our hands in a lot of ideas, but I'm optimistic about all of it and I think it's really exciting. We're all like, 'Do you know anything? Do you know anything?' We know nothing. It's exciting in that I'm sure we'll find out very soon what's going to happen and like anyone sort of looking to pick up the pieces after a job's ending, it's a lot. You have to think about a lot of things.

Soaps.com: Did you join "All My Children" in New York or after it had moved to Los Angeles?

Christina: I joined after it moved here. I moved here for it.

Soaps.com: So, you're from New York originally?

Soaps.com: Would you move back?

Christina: You know, I thought about it. I think ultimately I'm kind of a New Yorker at heart, but I'm staying here for a while. I'm a big believer in signs and for the show being in New York for 40 years and then the time that I get the job it's in L.A., I'm like, 'I think I should be here.' So, I'm going to give it a shot on the West Coast.

Read Soaps.com's interview with J.R. Martinez and check out the All My Children Fan Club Weekend Photo Gallery. Keep up to date on All My Children and One Life to Live Migrating Online. Join us on Twitter @soapoperafan, and Facebook. Come tweet and Facebook with us about "General Hospital," all the other soap operas, "Glee," "Grey’s Anatomy" and "Vampire Diaries!"