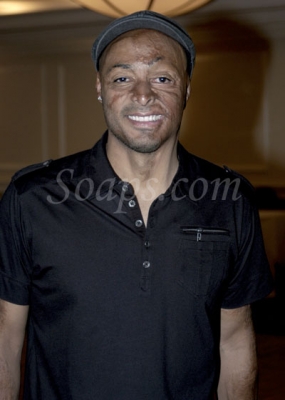 “I’ve come to not underestimate the fans when it comes to whatever they’re passionate about.”

Just before he was to moderate the Q&A at the All My Children Fan Club Main Cast Event, J.R. Martinez took a few minutes to chat with Soaps.com. The United States Army veteran turned motivational speaker, who has been playing the role of Brot Monroe since 2008, shared his thoughts on “All My Children” moving online, his future as an actor and the amazing support of the fans.

Soaps.com: How did you get chosen to emcee the event?

J.R.: Well, Walt [Willey, Jack, who emceed the event last year] for some reason was not able to be here, so they reached out to me because I of course publicly do a lot of motivational speaking and host a lot of events. They kind of felt it was a good opportunity for me to kind of just come and…they felt I’d be good at it. I’m excited. You know, kinda nervous, we’ll see what happens because there’s big shoes to fill when it comes to Walt. However, I think I’ll be able to handle it.

Soaps.com: What are your thoughts on the transition “All My Children” is going through and it possibly ending for you?

J.R.: It’s tough. Individually, besides the major characters on the show, individually for myself at least, the show is bigger than me. It’s a lot bigger than me. It was around for 38 years before I even came to the surface, so it’s connected a lot of people. It has such rich history when it comes to families and homes. It’s sad it had the idea of it potentially ending. However, with the idea of it going online, even though it is online and it’s not exactly what people want, at least you know that it’s there. Hopefully later down the road maybe they can find a way to bring it back to a network or something like that where it can be easily accessible to all the fans. As far as for Brot Monroe, it’s been a great three years. I was only expected to be on for three months and to have grown and be accepted and embraced the way I have been and been able to tell the story I’ve been able to tell through my character, whether it ends or continues, it’s been an unbelievable ride and I would never change it for anything. I’ll be forever grateful for the opportunity I had here.

Soaps.com: Are you keeping an open mind about following the show online?

J.R.: I am. I think we all are. I think we all are keeping our options open. It’s just a matter of what their plan is. We don’t know. None of us have been reached out to individually. We don’t know. There are a lot of kinks that need to be ironed out. We just hope that they do come to all of us. All of us obviously enjoy what we do. We enjoy going into the homes or offices of everyone that we go into on a daily basis. We hope we can all kind of make the transition, but there comes the point where sometimes some people have to make the best decision for them and hopefully it works out.

Soaps.com: Regardless of what happens with "All My Children," will you continue your acting career?

J.R.: I will. I think I am going to try it a little bit. I think I've gotten the bug. Doing it here and kind of seeing how I, J.R. Martinez, can take myself to another place, so I would love to have the opportunity to take myself to another place. Everyone's told me, 'You got some talent there,' so it will be interesting to see what I can tap into. People dream and go through so many hoops to try to get to where I've had the opportunity to be and for me to kind of back out of it and run away from it, I mean, it's like, no. I was blessed to have such a good opportunity and now it's time for me to try and excel at it.

Soaps.com: Did you ever consider acting before you were given this opportunity?

J.R.: It crossed my mind, but it crossed my mind as a way to potentially be like another platform to share my message. It was never something that crossed my mind to the point where it translated into action. I was always like, 'Oohh. That'd be cool,' but I never did anything to kind of follow through with it. Now that I've had the opportunity to do it, I really like it and I really enjoy it and I feel comfortable doing it. I really do. I've transitioned into…I really think it has a lot to do with everyone on the show. From the cast to the crew, everyone's so nice and generous and embracing and warm. They're just so loving, it's just like, how can you not be comfortable there? Everyone's understanding that I didn't come from [an acting] background and they tried to show me as much as they could on the fly. It's been great. It's been a really good experience. I know I'm never going to run into something like that again, whether I get another acting job or not, but just to know I had it here at one point, it carries me through.

Soaps.com: Were you surprised by the fan devotion and response to Brot and the show?

J.R.: Being on the show for three years, and this is my third fan event, I've come to not underestimate the fans when it comes to whatever they're passionate about. When it came to them embracing my character, which was obviously a brand new character, it was, 'Alright. Let's see if people like this. Let's see if people like this guy that's not an actor. Let's see if he messes it up.' They really embraced me. They really embraced Brot. They really embraced his struggle and his story and they said, 'We love it. Keep him around.' And it's because of them I'm still here. And then of course when the announcement was made that the show was going to be cancelled, I mean of course I knew there was a lot of upset fans, however, I didn't put it past them that you know what, they weren’t going to just say, 'Alright, it's been a great 41 years.' I personally feel they've all won. I personally feel because of their voices is why it's being picked up online. Because people feel like, you know what, Prospect Park says there's a big need for it and we'll make a lot of people happy by doing that.