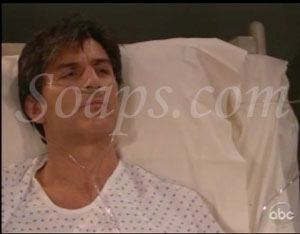 “All My Children” just gets better and better. Even though it’s my job to watch it, it’s truly become appointment TV for me because I can’t wait to see what happens next. I feel a lot of gushing coming on, so let’s get to it.

Reality sets in.
What a great tease for David, after admitting he was basically raising the dead, to tell Griffin his fears of what they are working on are valid because the truth just might come between him and Kendall. That can only mean David has Zach stashed away somewhere like he had Dixie. Which leads me to my only real complaint about the show right now: With Zach returning this week, which I cannot wait for, Griffin and Kendall are over before they even got started. I really would have liked to have seen some romance between them aside from a few kisses. Ah, well. You can’t have everything I guess. I am enjoying watching Griffin put all the pieces together of what David is doing though, as he slowly realizes that his mentor is not exactly who he thought he was. Hopefully Griffin’s story will continue online so we can see him in a full-blown romance. Preferably without his shirt on.

The cuckoo’s nest.
What can you say about the gang of crazies at Oak Haven? The actors look like they’re having tons of fun, which is definitely translating through their performances. I’m loving Janet’s attempt at playing peacekeeper despite her murderous tendencies creeping in. And Erica fleeing a little out of sorts, but still holding her own against former nemesis Annie, as well as Marian and Janet, who all bicker about who is the craziest, is just a good time. And how funny was Marian when she thought Tad had come to rescue her? So much use of seamless history was used in those scenes, which only makes them more enjoyable. I almost don’t want anyone to leave Oak Haven. Ever.

Speaking of Oak Haven, Dixie’s story finally made some progress when Brot brought her there as well. Erica saw her at the end of last week, which I’m grateful for. I’m tired of Dixie being so isolated. Hopefully she’ll lose her zombie demeanor once she starts interacting with La Kane and her Downward Facing Death Squad.

Suspicions confirmed.
Jesse got the DNA results back and learned that his new nanny Maya was in fact Lucy's mother. He of course panicked thinking she knew the truth as well and wanted her daughter back. That's not the case, but despite Jesse having his own reasons for not wanting her to look after his daughter, he made a good argument that neither Angie nor Frankie seemed to understand. No one knows anything about the girl, yet Angie invited her to live with them full time. I think Frankie even admitted he knew nothing of her work history, yet felt she was prefect for the job. On what grounds? Not to mention, Maya's controlling and abusive boyfriend Mookie is always hanging around. I wouldn’t want her anywhere near my child either, even if I wasn't keeping the secret that my baby died and I was passing the nanny's off as my own. What do you think Jesse's next step should be? Vote in our All My Children Poll: What Should Jesse Do?

Poor JR.
It's really sad to see him spiral so far out of control this way. JR's back on the booze, alienating everyone close to him and scaring his son. It was heartbreaking to watch him talk to Dixie, who he thought was just an illusion during his drunken haze. Although, JR did rebound nicely the next day. After blacking out, he didn't even appear to be hungover. I wish I knew his secret. I do hate to see him lose so much ground after seemingly making some progress, but I can only imagine this is setting the stage for all the major people in his life returning: Dixie, Adam and even Babe. I can't wait to see how he reacts to encountering his lost loved ones.

Aside from loving seeing Scott and Madison finally onscreen together, feeling genuinely sad for Jake and Amanda, and giddily anticipating Leo and Zach's returns this week, that's all I got this time around. What did you think of last week's "All My Children?" Feel free to share your thoughts below and check out the All My Children Fan Club Main Cast Event Coverage.