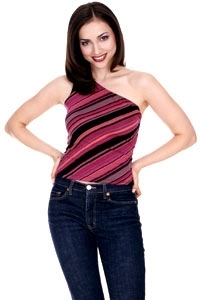 Eden, as Bianca at the Fusion offices (Soaps.com)

Since leaving Pine Valley as a regular cast member a year ago, Eden Riegel (Bianca) has been a very busy girl! She got married, she’s made a few guest appearances on the show, is shooting two movies and just launched an online television show! With so much going on, we thought it was high time we caught up with her!

First and foremost, lots of fans are wondering where Bianca has been throughout the latest Kane family ordeal (Erica’s imprisonment). I asked Eden if there were any plans in the works to bring her back to Pine Valley soon.

“I don’t right now but I’d really like to,” said Eden. “It was looking like I was going to come back a few weeks ago but now it looks like that isn’t going to happen. I’d love to visit Erica in prison and my whole Pine Valley family, so I hope to be back soon.”

Well, even if Eden doesn't know about a quick return to All My Children, she is staying very busy. Her latest project is an online series called "Imaginary Bitches". Why an online series?

"Well, a couple things happened," she said. "I was working on "The Year One" with Jack Black. All of those guys are dedicated internet content providers. . .and I saw how devoted they were about the internet. It is an amazing place to get together with your buddies and a camera! It reaches the kind of audiences that television shows will kill for. During that time, Andrew [Eden's husband] called with a series idea and I didn't even let him finish, I said I'd do it."

Eden's character is a single girl with a group of coupled-up friends. Her name is "Eden" and she's. . .well, she's kind of crazy!

"But being single can make you crazy! She is facing the lonely reality that her friends are in serious relationships and don't have the time for her anymore," Eden said. "So, she makes up imaginary friends but those friends are really bitches. [Eden laughs] Sweet little Eden is forced to repeat what these 'friends' say. A lot of my single friends really relate to it. I think we all have bitchy voices in our heads that we silence but unfortunately, Eden can't silence those thoughts."

Eden is working closely with her new husband on the project. Andrew is producing the series. She says even though things were a little bit strange at first, everything has fallen into place.

"I've never trusted a director more. We're just having the greatest time. I could do this all the time; the part is so fun, the script is really fun and we're shooting more each week. After doing AMC, it is nice to have a break from all that drama!"

Speaking of Pine Valley, Eden isn't the only former Pine Valley lady working on the series. She is joined by Connie Fletcher (ex-Erin) and Elizabeth Hendrickson (ex-Maggie). Has it been fun taking on different roles with these actresses? How could it not?!?

"We're all such good friends, it's just fun to play with your friends," said Eden. "It's what we experienced on AMC, but the schedule is different and the stories are different so we had to leave our friendships on the dressing room floor [to shoot AMC]. Here, we're all just having a great time, the whole time. To be a working actor, you spend a lot of time pounding the pavement and being rejected, so it's nice on that down time to do something that is just pure fun."

Season One of "Imaginary Bitches" is running now; there are 13 episodes scheduled. Eden tells us that they would like to begin shooting a second season soon. You can watch the show here. New episodes are launched every Friday night. Following the show, Eden has plans to do a live chat with fans and a few of the other actors may stop by, too. How fun is that?

I'd like to thank Eden for taking time out of her busy schedule to chat with Soaps.com. It's always great to catch up with our favorite stars. We miss you in Pine Valley, Eden, but we wish you the best of luck with all the projects you have going now.

By the way, fans, we'll have more from Eden coming up in a few days - we'll talk about the movies she has in the works and get a little more information on her life as Bianca Kane.

AMC's Cameron Mathison to Host a...

All My Children's Sabine Singh to...

Donald Trump Behaved in the Second Debate, Which Gave Joe Biden the Chance to Destroy Him