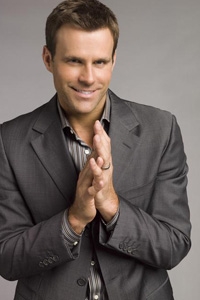 It looks like life is going to stay busy for All My Children’s Cameron Mathison (Ryan). He has signed on to host a new game show on TLC called “Your Place or Mine?”!

On the show, two families will compete against one another for a chance to win all new furnishings for their homes! Sounds cool, eh? The families will answer questions – kind of like the old “Family Feud” game show. They can even steal items from the other team! Plus, as the game goes on, decorating and home improvement tips will be given out.

This isn't Cameron's first gig as a host. He hosted the SOAPnet series "I Wanna Be A Soap Star" and the SOAPnet special "SOAPnet Reveals ABC Soap Secrets".

In the past year, things have heated up for Cameron. In addition to his regular role as Ryan Lavery - and the front-burner storylines that come with it! - he starred on "Dancing with the Stars" last fall. Cameron performed well on the show but didn't make it into the final rounds, unfortunately. During each of the past two seasons, he has also hosted "I Wanna Be A Soap Star". Don't worry about missing out on Ryan in Pine Valley because of Cameron's new gig. He is still contracted with AMC.

"Your Place or Mine" debuts on Sunday, June 8 at 8 PM on TLC. Check your local listings for the correct channel.

Congratulations, Cameron! Soaps.com wishes you the best on the new show!