Meet the New Faces At All My Children 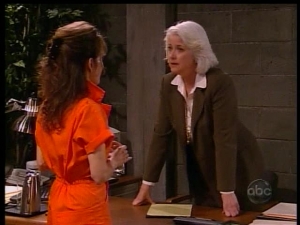 Lots of new faces have been seen around Pine Valley the past few weeks. With Erica in prison, Jake and Aidan being held by rebel leaders and Tad on the search for Kate there were bound to be at least a couple of new additions. We thought it would be fun to see where those new faces were before they hit All My Children.

Let’s begin with all the new faces surrounding Erica in prison. We already know about Carmen, Erica’s cellmate and new best friend, but what about the leader of the prison gang? Her real name is Joselin Reyes. In addition to this role, she has acted on several television dramas including “The Sopranos”, “Law & Order: SVU” and “Law & Order”. The gang leader’s sidekick is played by Cherelle Cargill. She has appeared on all three “Law & Order” franchises and will next appear in the film “Frank the Rat”.

Also appearing in several prison scenes is Warden Hitchcock, played by Susan Bigelow. The warden is definitely not a fan of Ms. Kane. She stuck Erica in solitary confinement until Jack and Sam came to the rescue! We're sure she has more planned for Erica as her stint in prison continues. Ms. Bigelow has appeared on several television shows as a guest-star including "The Cosby Show", "Law & Order" and "Law & Order: Criminal Intent".

Caroline Clay, who plays Nurse Hazel, is a new-old face. She began playing the part of Hazel in 2005, but hasn't been seen since leaving Dr. Madden's clinic. She is back now, and helping Tad with the search for Kate. In addition to her role on AMC, she has appeared in films such as "Allergic to Nuts", "SherryBaby" and "The Last Romantic".

With Aidan and Jake in trouble in Darfur, we knew some new faces would appear. Gilbert Owuor plays the rebel leader.

Finally, Ryan's therapy seems to be going much better even if he hasn't remembered Annie yet. All that progress is due to one person: Dr. Gail Saltz, his on-screen therapist. This isn't a hard job for Dr. Saltz, who is a real-life therapist. She has been featured on episodes of NBC's morning news program "Today". She has also shared her insights on "Oprah", "Dateline", "The Early Show" and on different news programs on CNN and Fox News.

There you have it, fans, you are up to date with several new faces from Pine Valley. If you see a face that looks familiar but just can't place it, chances are you've seen the actor before. Drop us a comment here and we'll see what we can find out about the new face!

At Home With Christine Evangelista: See Inside ‘The Arrangement’ Star’s Luxe Hamptons Hideaway