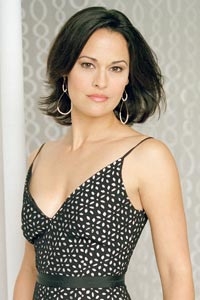 After more than a decade of time spent in Pine Valley – minus a short bit of time away from our favorite fictional town – Sydney Penny is moving on. Soaps.com has learned that Sydney is leaving the show in just a few weeks!

When she first arrived, Sydney’s Julia was one of the many members of the Santos family. She and then-husband Noah left town when he was placed in the Witness Protection Program. Julia returned to Pine Valley in 2005.

With Maria, Mateo and the rest of the Santos crew off to greener pastures, Julia took over the care of Wildwind.

She invited several other characters to move in, including Aidan Devane, Jonathan Lavery and Amanda Dillon to name a few. Then, last spring, her friend gave her custody of 5-year-old Kathy (who we now know is Tad's missing daughter, Kate).

In the last year, however, a front-burner storyline for Julia hasn't developed. The character has been in most hospital scenes but normally only to take patient's vital signs or do quick check-ups.

The storyline surrounding the Kathy/Kate mystery is heating up this month. Dixie's ghost has returned to torture Adam into revealing the truth so that Tad can be with his daughter. Rumor has it that Julia will leave town to take a job elsewhere soon after the big reveal.

But, that has several fans asking why Julia has to go.

FalconBoy12 said, "Just because we find out Kate is Tads, why must Julia get the boot? This should bond Julia and Tad. Since Dixie is dead and Krystal still seems into Adam, they should have a little foursome story, it would be interesting to see how this all turns out.

Others disagree and say that since there isn't a good storyline surrounding the Julia character, it makes sense for her to leave town.

Treester said, "Julia hasn't had a decent storyline since she came back on the show. She is virtually useless. Once Tad finds the kid, there is no need for her. Similar to now, no need for her."

Sydney Penny's last airdate as Julia is set for June. Soaps.com wishes Sydney the best of luck with her future projects!

What are your thoughts on the casting change? Does it make sense for Julia to be written off the show? Or should the writers take a different tack and create something great for the character? Drop us a comment here and we'll discuss all the options!

Meet the New Faces At All My...

Dancing With the Stars Recap: Which Couple Fell Short of the Top 10?