In need of a cold shower.
The sexual tension between Griffin and Kendall got to me again last week as they said their goodbyes without admitting their true feelings for each other. I don’t think I've wanted a soap couple to get it on this badly since I was in high school. When Griffin ripped open his shirt so Kendall could listen to his heart, I was seriously hoping he'd rip off more of his (and her) clothes so they could go to town. Sadly, I will have to wait for that to happen. Zach's on his way back though, Griffin. Hurry up please.

Hot and bothered.
Speaking of sexual tension, after hearing Bianca was attracted to her, Marissa hightailed it over to JR and laid a passionate kiss on him. JR was thrilled, but unfortunately for him, it seemed like she only did it to work out her sexual frustrations where her best friend is concerned. JR and Marissa hit the sheets and declared they were back together, but, I'm thinking, Marissa will change her mind once she realizes Bianca's attraction isn't one sided.

Running out of steam.
Tad and Cara are growing closer, but I'm losing interest. They are sweet together, but they certainly don't generate the heat Kendall and Griffin do, or Marissa and Bianca for that matter. Even if they do get together, Dixie is making her umpteenth come back, which trumps any kind of bond Tad and Cara have formed. I'm not invested in Dixie at all, but at least she finally opened her eyes, so we can stop watching her writhe around while dreaming of her past. 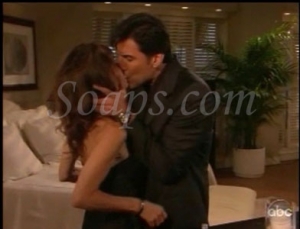 Last week Pine Valley saw a wedding, a lot of sexual tension, and some good old-fashioned manipulation. Some other things snuck in there as well, so let’s get to it.

For real this time.
Ryan and Greenlee got married again last week with Tad presiding and while it was a little better than their last wedding, it was still super rushed and pretty bland. And the knight in shining armor photo shoot afterwards was pretty cheesy. However, I am glad that they are at least committed to each other. I’m tried of wishy-washy couples and Ryan constantly waffling between the women in his life has grown old. So, at least there’s a feeling of security there.

A twinkle in his eye.
In an attempt to keep Jane under his control, David slept with her. She claimed to be a virgin, which explains why she’s been so skittish about sleeping with Jack and leads me to assume her daughter was adopted. I wonder if they will address that. Regardless, David’s continued manipulations have really livened things up on the show. I don’t know what he ultimately has planned for Jane or even Angie, but his involvement certainly makes her storyline more interesting as well. How handy that David just so happens to have been researching how to grow stem cells for whatever he needs them for. He really is the all-purpose evil genius. How do you want to see things wrap up for David? Vote in our All My Children Poll: How Should David’s Storyline End?

Fierce.
I don’t know how I feel about Madison’s idea for a new Fusion line. I like that it’s about empowerment, but I have to agree with Greenlee and Kendall: It was a little scary. David of course found Madison in her bad-girl getup, which can only mean he will probably try to manipulate her for his own gain as well. I’m okay with that association, because right now the more David the better, but I did miss Scott again last week. I hope his and Madison’s relationship hasn’t been abandoned and he can help bring a little more sanity and stability to her life again.

All My Children Saturday Teaser Poll: Who Gets Fired?

All My Children's Susan Lucci To Desperate Housewives? (Video Update.)