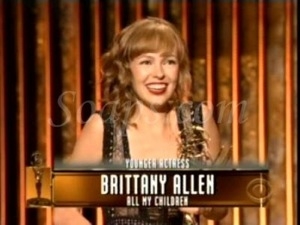 Sarah Glendening may be in the role now, but last night Brittany Allen won the Outstanding Younger Actress Daytime Emmy for her work as Marissa Trasker Chandler. Allen packed a lot in during her time on “All My Children,” as from April 2009 to December 2010, Marissa came to town, helped JR (Jacob Young) through cancer, married him and then slept with Scott when she thought JR (then played by Adam Mayfield) was doing the same with Annie (Melissa Claire Egan).

Congratulations go out to Brittany, who told the press room she was off to work on a zombie/comedy film in Canada. Soaps.com was in the thick of all the Daytime Emmy action, so in case you haven’t already, check out our Daytime Emmy Red Carpet/Backstage blogging and Daytime Emmy Photo Coverage!