Leven Rambin Not Returning to All My Children. (Updated.) 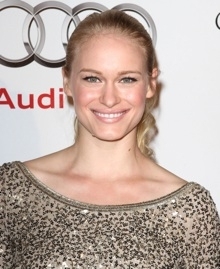 Lily won’t be back.

Soap Opera Digest is reporting that Leven Rambin’s shooting schedule on “The Hunger Games” will conflict with her planned return to “All My Children.” That unfortunately means Lily won’t be returning to Pine Valley before the soap ends its network run in September prior to migrating online.

Yesterday, Soaps.com speculated on the return of fan favorite Leven Rambin (Lily) to “All My Children,” after she tweeted, “I might have some good news for “All My Children” & Lily Montgomery fans!” We’re happy to report that the speculation was correct. The actress posted on her official Facebook page that she’ll be returning to the show before September’s finale.

The actress confessed, “Can’t believe I’ll only be able to play Lily Montgomery one last time. [The] role is such a huge part of who I am as an actress and person. Taught me everything I know. Bittersweet if there was ever such a thing.”

Congrats to the actress. Leven is also playing Glimmer in The Hunger Games. Please feel free to participate in our poll about Rambin’s return to the show.

All My Children Stars React To Last...