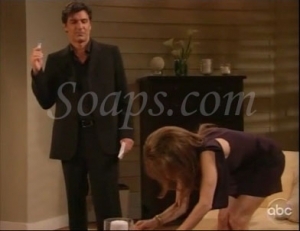 Last week produced some exciting casting news, more fun with David and Jane and questions about the necessity of certain characters. Overall, it was another decent week in Pine Valley, so let’s get to it.

Dead or alive?
With the end drawing near, more returns are being revealed. Last week we learned that Josh Duhamel will reprise his role as Leo du Pres. I have to say, I’m pretty excited and impressed by this news. He got his start on “All My Children” and after all his post Daytime success, he clearly isn’t afraid to pay respect to it. George Clooney (ex-Doug) did it before “ER” went off the air. Julianne Moore (ex-Frannie/Sabrina) showed up on “As the World Turns” before it went dark forever. And now Josh Duhamel. He’s always been likable, but even more so now. However, the question remains: In what manner will he return? He was last seen going off a cliff, presumably to his death. He’s supposedly only returning for one, maybe two episodes, so there’s really no time to break Greenlee and Ryan up, reunite her with Leo and do it justice. I suppose, most of the story could take place before we even see him, giving it some plausibility, but with Dixie and Zach already set to return from the dead, resurrecting a third thought-to-be-dead character within a month of the other ones is just too much, even for a soap. So, that leaves him returning as a ghost or in a dream. I hope if that’s the route they take, then he has time to visit his brother David, as well as Greenlee. Or…Maybe Jane is Leo and David’s mother Vanessa. That would at least set the story up for Leo’s return if he is alive.

Another blast from the past.
A couple days after learning Leo would be reappearing, came word that Maria (Eva La Rue) will be returning as well. While it's cool to see faces from the past resurface, and I’m sure there are more to come, I could take or leave this one. However, since there is really no one else for her to connect with on the canvas, and since she has a history with Zach, I wonder if she will be the one to find Zach, nurse him back to health and bring him home. What are your theories?

The fun continues.
David is so entertaining as he lords his power over Jane. He really is at his best when he has that gleam of deviousness in his eye. It's even better when his manipulative behavior is for a real purpose and he's not just going around threatening people for no apparent reason. The reason here is that he wants his career and control of the hospital back. And Jane is just the vehicle to do that. Speaking of, Jane also continues to amuse, but there obviously seems to be some real issues underneath her drive to live life to the fullest on Erica's dime. I will go along for the surprisingly comedic ride though until things become more serious. My only complaint is that I wish David would have demanded proof that Erica was alive and well before going along with Jane's rouse. Because, deep, deep, down, he does care about certain people, Erica being one of them, and he is a doctor for God's sake. It's kind of his job to ensure the well being of others.

Out of sight, out of mind?
After weeks of not being seen, Colby and Asher appeared. I didn't even remember they were on the canvas until I read the spoilers for the upcoming week. I have to say they were not missed and don’t seem essential, especially at this stage in the game. Actually, even if the show were to continue after September, I'm not sure how essential they would be. Caleb could be lumped in there as well. None of them have a storyline and I feel like they are taking away from the characters I do care about. What do you think? Vote in our All My Children Poll: Colby and Asher.

Aside from loving Scott punching a smarmy JR, enjoying the sexual tension between Griffin and Kendall and wanting the Tad/Cara/Jake/Amanda quadrangle to stop being so angsty, that's it for me this week. What did you think of last week's "All My Children?" Feel free to share your thoughts below.

All My Children Alums Julia Barr And...