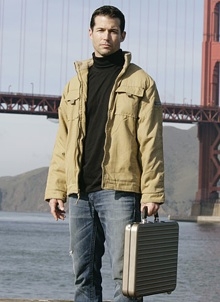 “All My Children’s” former Braden Lavery, Zen Gesner, will take part in ABC’s new reality show “Take the Money and Run.” The six-episode series is being billed as a spy thriller where regular people try and outwit high-level investigative professionals. The “cat and mouse” competition will take place in San Francisco, Chicago and Miami. The winner will take home $100,000, which will be handed over by Zen.

Zen played Braden from 1998 – 1999. Braden was Ryan’s (Cameron Mathison) brother, who worked for Palmer (James Mitchell), befriended Dixie (Cady McClain) and was accused of raping Kit Montgomery (Paige Rowland). Feeling guilt over the abuse Braden took for him and their siblings as children, Ryan helped get his brother out of town before he was arrested. Years later, Braden turned up dead at Jonathan’s (Jeff Branson) hands.

Since his time on “All My Children,” Zen has appeared in the movies “Me, Myself & Irene,” “Shallow Hal,” “Fever Pitch” and “Hall Pass,” among others. “Take the Money and Run” will premiere on August 2 at 9.00 PM EST.

Find out what other soap stars you might see on reality TV at Soap Opera Actresses Film Reality Show Pilot. Join us on Twitter @soapoperafan, and Facebook. Come tweet and Facebook with us about "All My Children," all the other soap operas, "Glee," "Grey’s Anatomy" and "Vampire Diaries!"