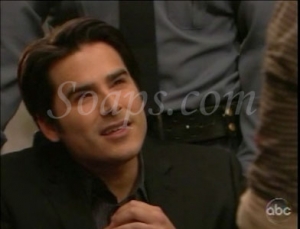 Getting through the pain. (Soaps.com)

For as long as I can remember, “General Hospital” has been my number one soap. However, “All My Children” has taken me by surprise by being the one I am more interested in watching these days. Especially now that, among other things, Ricky is out of the picture, Dixie has been popping up and “Erica” has turned into the comic relief. Let’s get to it.

Ricky, out.
Ricky was arrested and presumably hauled off to prison last week. After a run-in with Ryan and Greenlee, where he taunted them about not really being married, and getting under Griffin’s skin about his feelings for Kendall, he was gone. I’m happy to be moving on from this storyline, but I don’t necessarily feel satisfied with Ricky’s comeuppance. Kendall helped take him down, but I’m not feeling her closure on this. Or more to the point, mine, I suppose.

Moving on.
Despite Ricky being arrested, Kendall is having a hard time walking away from the ordeal. I felt her pain upon her admitting to Bianca that releasing her anger at Ricky would be like letting Zach go. It seemed like such a real reaction to the situation. But even better was her conversation with Tad. What a great scene as Tad, speaking from experience, told her it was okay to love again. That love doesn’t have to be as great as the one she shared with Zach, but it could still be good. Just different.

Speaking of, I'm pretty impressed how believably Kendall moving on with Griffin seems. Kudos to the actors for making their connection plausible in the wake of the dismantling of supercouple Zendall. Of course, Zach is returning, but it's no easy feat to team half of a hugely popular couple with someone new. Some fans might still not be happy with it, but according to one of our previous polls, 50% of those who voted wanted to see Griff and Kendall get together. If you're a regular reader of my blogs, you already know I am among them. In fact, you might be tired of hearing it.

Fun with David.
I can't stress enough how much I love David getting involved in the Jane/Erica storyline. I loved seeing "Erica" crack open a beer and it was perfect that David caught her doing it. His puzzling reactions to her bizarre behavior are entertaining and I'm really looking forward to seeing what happens when he figures out Jane has taken over Erica's life. Do we have any doubt David will use it to his advantage somehow?

The hardest hit.
Madison and Ryan buried their daughter last week, which was sad, but my heart went out to Scott the most. As he told Greenlee, he loved Sara as his own. So, there's that heartbreak, but he's also grieving the loss of his relationship with Madison. She's ready to stand on her own two feet, which I applaud, but I hope when she finds her footing, she'll give Scott another chance.

Another sighting.
We saw Dixie thrashing around in her bed again in some mysterious place while dreaming of Tad. That's only twice we've seen her in two weeks. I'm not even that excited that Dixie has returned, but even I feel like that's not enough screen time for her. Let's get to the meat of what's going on already. Time's a wasting. I do fear what will happen with Tad and Cara upon Dixie's return though. I suppose with Zach returning as well, that will leave Cara and Griffin to ride off into the sunset together.

That's it for me this time around. What did you think of last week's "All My Children?" Feel free to share your thoughts below.