New power couple.
David and Liza exuded a lot of steamy chemistry as they hit the sheets last week. She of course didn't want anything to come of it or for anyone to even find out. He on the other hand felt that if they were that great in bed, they could be even better out of bed. I tend to agree. Hopefully Liza will come around because they are hot together.

Deal with the devil?
Speaking of David, he told Angie he could help restore her eyesight by way of experimental treatments. What else would you expect from David? I really enjoyed Angie's conversation with Jake about it, as she expressed her desire to actually see her child. I love Angie and Jake's friendship and know that Jake will protect Angie where David is concerned. She'll probably need it, as I have a feeling Angie will let David help her, which could be pretty interesting since we still aren't sure where exactly David's moral compass is pointing these days. I imagine Angie will keep this a secret from Jesse as well, which will give both of them reason to act jumpy around each other. What do you think? Vote in our All My Children Poll: David's Offer To Angie.

What comes around...
Since Greenlee knows a thing or two about being a spoiled brat, she let Emma know she's on to her. While I like that they aren't exactly letting Emma walk all over Greenlee, I am enjoying Emma sticking it to her when she can. This could be fun to watch as it continues.

Aside from loving how cute Madison and Scott were together, that's all I got this time around. What did you think about last week's "All My Children?" Feel free to share your thoughts below. 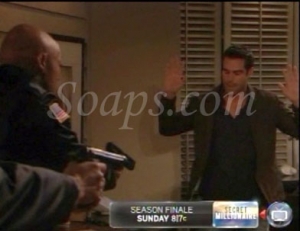 Credit: Steaming up the sheets. (Soaps.com)

It was announced that “All My Children” had once again appointed Lorraine Broderick as the head writer. Some see this as a reprieve from the cancellation rumors, while others believe she has been brought in to usher the show out. It remains to be seen, but I certainly hope it’s a positive sign of good things to come. Things haven’t stopped unraveling in Pine Valley as we wait out the rumors though, so let’s get down to dissecting what happened last week.

Forward movement.
Something of consequence finally happened in the Ricky/Kendall/Griffin story, as Ricky killed Diana and framed Griffin for her murder. This prompted Kendall to tell Jesse Griffin was the one stealing drugs from the hospital. I felt bad for Griffin that Kendall broke his confidence and I’m kind of disappointed to see Diana go, but I’m really happy that after weeks of Ricky stalking Kendall and having the same conversation with Diana, this storyline is finally going somewhere. I just hope Ricky is exposed relatively quickly so he can either be killed himself or go to prison and we can all move on.

Suspicious minds.
As Jesse spent the week freaking out over fooling Angie into thinking Lucy was really theirs, Cara expressed her doubts to Jake that the Hubbard baby wasn’t exactly the Hubbards’ baby. Despite being a doctor, who should probably also question how the baby could have survived a placental abruption, Jake chocked it up to a miracle. I already said it last week, but I’m really glad there is someone questioning what’s happening. Even David seems to be suspicious. Thankfully, Angie is picking up on her husband’s bizarre behavior as well. With doubts already swirling, Jesse constantly ready to jump out of his skin and Maya, Lucy’s biological mother, circling, I have to wonder how long this rouse will last. 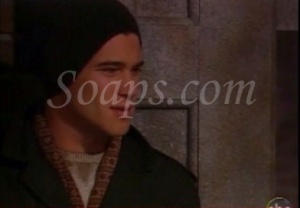 All My Children Saturday Teaser Poll: To Asher's Rescue