Hard headed.
Caleb is starting to feel like a stalker. How many times does Erica have to tell him she's not interested because she's in love with Jack for him to stop showing up at her door or calling her? She is marrying another man. Get over it. The Caleb who first came down from the mountain and who I enjoyed would not stand for her "mixed signals." He should be so done with her. Krystal's available though. He should go knock on her door. What do you think? Vote in our All My Children Poll: What Should Caleb Do?

A new man.
I'm liking this version of JR. Don't get me wrong, I don't want him to go all good guy on us, but it's nice to see him reach out to people instead of constantly being on the defensive. Last week he tried to set up Colby and Asher and also offered Reese a job in order to get her to back off the custody fight with Bianca. I'm not sure I want to see him and Marissa to get back together, but I would like to see this softer, gentler JR stick around for a bit longer.

Trouble ahead?
Despite Jake reassuring Amanda they are on the same page where Cara is concerned, I have my doubts. I feel Jake still needs to process what went down with Cara before he can put it to rest. Working with her and having to hang out with her because Tad keeps forcing the issue is not helping. I'm kind of surprised Tad is so insensitive to that actually.

Inching closer.
I enjoyed Kendall and Griffin's date in the park, especially that her fears about the reason he has been stealing drugs were eased. They were also cute when she helped him get rid of the overeager drug rep. I know some fans think it's too soon for them to get together after Zach's death, but I'm looking forward to watching their relationship grow. I have no doubt he will stick around Pine Valley, even if she does get him his money from the casinos. I just need Ricky to go away. Next week things escalate in this story, but not quickly enough me, as Ricky continues to hang around.

Aside from loving the scene of Randi and Frankie in the elevator and wishing we got more of them, that's all I got this time around. What did you think of last week's "All My Children?" Feel free to share your thoughts below. 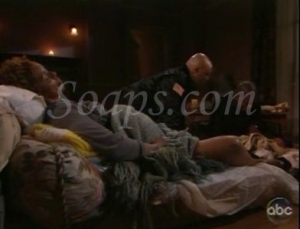 Credit: Bringing his family together. (Soaps.com)

Last week a new storyline involving the Hubbards kicked off and others continued to maintain their course. Let’s get to the good and the bad of it all.

Hubbard drama.
The big story last week involved Jesse switching his and Angie’s stillborn baby with another baby who was dumped off in Brot’s car. I don’t know if I was just emotionally drained from little Jake dying on “General Hospital” the week prior, but I just wasn’t feeling the scenes of Jesse’s torment and pain. I know baby switching is a soap staple, but I do not get Jesse’s motivation for duping his blind wife into thinking the abandoned baby was her own. It actually seemed kind of cruel. And Brot didn’t seem to have any qualms about facilitating it. How could he just bury the baby like that with no second thought? Not to mention: What are the chances the baby dropped off in Brot’s car, at the exact moment Angie’s baby died, was the correct race, sex and blood type? Sometimes things are just too absurd to overlook. I did start to become more invested once Jesse and Brot brought Angie to the hospital and she started to bond with the baby though. At least Cara was smart enough to question how the baby could have survived the traumatic birth, that in reality should have killed it.

New addition.
Of course the girl who left the baby in Brot’s car ran into Asher immediately afterwards. Even though it just added to the absurdity, it was overall a good thing because she will create more drama once she eventually meets the Hubbards and realizes their baby is actually hers. It also gives Colby and Asher another young person to play off of. Not that I want Pine Valley crawling with teens and young adults, but those two really need to make some friends. 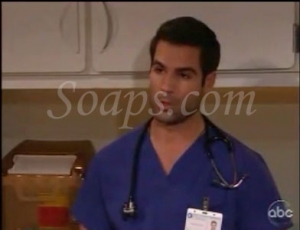 All My Children Saturday Teaser Poll: Who Tells On Griffin?

Video Promo: All My Children's Susan Lucci On The Wendy Williams Show