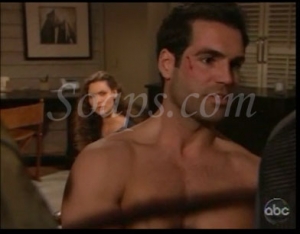 Will friendship turn to love? (Soaps.com)

Last week treated us to worrisome rumors, an unseen auction and some questionable character developments. A few other things happened as well, so let’s get to it.

A reprieve.
Last week the rumors about All My Children getting canceled grew louder. However, they were laid to rest when a few of the actors took to Twitter, and the like, to alleviate their fans’ fears. While they assured us the show wasn’t going anywhere, they urged their fans to call in to voice their support. As Soaps.com’s Editor in Chief, Christine Fix pointed out, if the show was so safe, why the call for action? I have no idea what the real story is, but I won’t be too surprised if we learn in the next couple of weeks or months that Pine Valley will be no more. However, I will be pretty bummed out if that does happen.

Pine Valley’s hottest hunks.
While I found the ensuing dates to be a lot of fun, the silent bachelor auction itself was lame. I would rather have seen the single men of Pine Valley strut their stuff down a catwalk while the women bid on them, silently, or otherwise. I imagined Opal battling Kendall for hot doc Griffin and Krystal and Erica going head to head for Jack. Instead, we just got the women dolling out their cash on their cell phones. I also had to wonder why Cara, who was supposed to be pretending to be happily married, placed a bid. I realize she was supposed to bid on her brother, but when she changed her mind, why not just give the money to charity outright? I can’t imagine her going on the date, even if it was with a fake minister, was good for her cover. Not enough single women in Pine Valley I guess. Who had the best date? Vote in our All My Children Poll: Up For Auction.

A changed man?
JR opted out of the auction by outbidding everyone so he didn’t have to go through with a date. He told Marissa he did it so he could be with her. He's also been reaching out to Scott and trying to look out for Colby. I like his newfound focus on family, but I still find it a bit jarring that JR all of a sudden wants Marissa back. Perhaps he's just lonely and Marissa is the easiest way to fill the void he feels. Whatever his reasons, JR just might face some unexpected competition in Bianca for his ex-wife's affections.

Fact finding mission.
Greenlee sweetly tried to give Kendall reassurance that it was okay to go on a date with Griffin and have fun, but Kendall insisted to her friend she was just doing it to mine for information. She then proceeded to tell Greenlee, the owner of the hospital, that Griffin was stealing drugs from her establishment. Unless I missed something and Greenlee is no longer in possession of PVH, I don't understand why Kendall would compromise him like that. What I do suspect, is that Kendall is hoping to clear Griffin of any evil doing, namely selling drugs to kids on the street, because she cares about him more than just as her doctor.

The good daughter.
I'm kind of liking how snotty Emma is acting towards Greenlee. Getting mixed up in Annie's shenanigans over the years was bound to screw her up. The daggers she shot Ryan and Greenlee at the end of Friday's episode as they kissed made me wonder if Emma will turn out to be an evil seed and start sabotaging her new stepmother. It might be an interesting new hurdle for the Laverys to face, in addition to Greenlee's lies and their union not being legal, of course.

Not buying what they're selling.
They really need to drop the Erica/Caleb angle. They just don’t have the chemistry that exists between her and Jack. I don't for a second think that Caleb is a threat to Jack, no matter how hard TPTB try to force me to believe it.

Aside from having high hopes for David and Liza ruling Pine Valley and loving how adorable Scott and Madison were on Friday's episode after his "date" with Marissa, that's it for me. What did you think about last week's All My Children? Feel free to share your thoughts below.

All My Children Alum Justin Bruening...