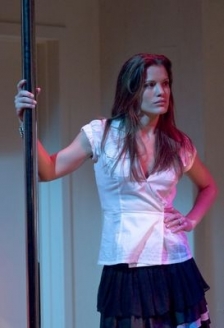 She is best known for playing Pine Valley’s good-girl Annie Lavery, but Melissa Claire Egan is much more than her on-screen persona. The Melissa I chatted with just a couple of days ago was funny and warm and had a lot to say about her hopes for a fun-filled Annie in Pine Valley!

Here is what Melissa had to say about Annie, pole dancing and that hunk we call Ryan.

Kristi: “Let’s talk about Annie for a bit – What makes her a fun character to play?”

Melissa: “She’s a lot different than Melissa, that makes her fun! She is a wife and mom and very different from me. I’m also liking that they are toughening her up, she is having to pick herself up and move on [with her life]. (Spoiler alert fans, as I spoke with Melissa, she mentioned that Annie and Ryan are over – at least for now!) They’re making her feisty.”

Kristi: “Annie is kind of a goody-girl but this month we’ve seen her kind of lose it with Ryan (about his memory) and we’ve seen a tougher side with Richie, too. Is Annie finally coming out of her shell? And will she revert to her old self?”

Melissa: "I hope she doesn't revert! I think [the writers] saw that I'm spunky and they're trying to make her a little more fun. Even if she goes back to Ryan, I think she can keep her spunk and energy."

Kristi: "You can't spoil the storyline but can you give us a few hints to where Annie is going in the next few weeks?"

Melissa: "Well, she hasn't gone wild, wild but she's been embracing her independence. She's just having fun! It's a struggle because she is completely in love with Ryan, but what is she supposed to do? He's in love with Kendall. There is a lot of cool stuff coming up - lots of great high-highs and low-lows. Long-term, I don't know, though."

Kristi: "Melissa told me that the hardest part of the changes is that she isn't spending as much time on-camera with co-star Cameron Mathison."

Melissa: "Cameron and I have really bonded [in the last couple of years]. But, lately we haven't had as many scenes and it's sad but it's also fun because there is something new to play. How the fans feel will really come into play."

Kristi: "What challenges would you like to take on with the role?"

Melissa: "They've given me some heavy storylines and some real emotional stuff. I hope they just keep giving me those emotional scenes. I'd also like something physical - like Sabine did with Greenlee [in the car crash and in the bomb shelter]. Maybe a physical challenge would be fun!"

Kristi: All the fans are talking about the Fusion girls are going to learn how to pole-dance this week. How did that storyline come about? Was it a fun taping?"

Melissa: "It was so much fun! We all read it and were just like "Oh, no!" but it was a fun, goofy day. It was just crazy that we got to learn the moves. We didn't take ourselves seriously at all. I really hope it looks good on-air."

Editor's note: I thought the pole dancing episode was hilarious! And I captured a couple of Melissa's dance moves for this article.

Kristi: "Has it been fun to find out a little more about Annie's past in the last few months?"

Melissa: "Yes! I was so excited [about Billy Miller, Richie, joining the cast]. Even after the wedding, people wondered why Annie didn't have any family, so the backstory has been great. And then when I met Billy, that made it even better! He's a great actor. We've gone out together and we've bonded as buddies."

Kristi: "What is next for Annie in the romance department?"

Melissa: "I'm not sure. There could be an Annie/Zach thing but I don't know how the Zendall (Zach/Kendall) fans would react! (Melissa laughed and said she didn't want to get on Zendall's bad side!) A lot of people like an Annie/Josh pairing and I love Colin, he's adorable. That would be fun!"

I think an Annie/Josh romance would be great for the show. What do you say, fans?

I'd like to thank Melissa for taking time out of her busy schedule to chat with Soaps.com about Annie and what is coming up on the show. It's always great to hear news from the set! And fans, this isn't all there is from Melissa. Stay tuned, we'll have part two of my interview in a couple of days - and Melissa will give us the scoop on the Broadway Cares event happening in a few days!

Meet All My Children's New Villain!!

Listen to Songs Featured on AMC!