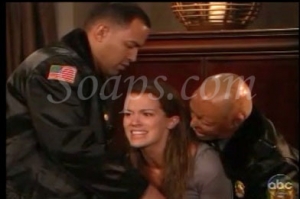 The truth comes out. (Soaps.com)

Last week, Annie’s storyline was resolved, Ryan discovered the truth, and the elders of Pine Valley doled out some advice. A few other things happened as well, so let’s get to it.

Siding with Ryan on this one.
Ryan finally clued in and discovered he was the father of Madison’s baby. He seemed to be more confused than upset though, which I would have been more of the latter. Madison’s argument for why she kept him in the dark was pretty weak in my opinion. I usually like to side with women in these instances, but I just can’t this time. The baby is Ryan’s, not just Madison’s, as she keeps trying to claim. He is not abusive or a drug addict or a criminal. He may be flaky, a little clueless and has a Superman complex, but he is stable, has money and loves his other kids so he should be allowed in his new baby’s life. Madison just sounded selfish and unreasonable to me. And don’t get me started on Greenlee. I still don’t get why she didn’t tell Ryan about the baby from the beginning. To find out what Ryan’s portrayer had to say about the situation, check out All My Children’s Cameron Mathison Talks Castle and Ryan.

Come back soon.
It was nice to have Joe around counseling both his sons and even express his doubts over Tad and Cara’s marriage. It would be nice if Joe could pop up every once in awhile to offer some sage advice or just bond with his boys. A go-to elder is always a nice stabilizing force in a soap. I know Opal is always there for Tad, but Joe is a little more level headed and reassuring somehow.

And just like that, she was gone.
Annie briefly returned so Emma could come home and she could be shipped off to the loony bin. It was tough to see Annie go considering I was reminded how much I enjoyed Melissa Claire Egan in the role. I hope the actress goes on to find success in Primetime or films, but she will be missed in Daytime. It seems all the strong forces in Pine Valley have left. I was glad to see JR break down though, as Annie was taken away, believing she was going to prepare for their wedding. With all his attention being lavished on Marissa again, I was concerned he completely forgot about his crazy ex. Although, now that he and Amanda are back in each other’s orbits, JR might have a new distraction soon.

Role model.
After all her issues with her mother, Colby turned to Erica for advice. I'm not sure asking for guidance from a woman who has been married ten times is the best route to take, but Erica is a formidable presence and a successful business woman who is close with her daughters. Erica told the simpering, insecure Colby to never apologize for who she is and to believe in herself. Good advice La Kane. I like the idea of these two forming a relationship and I'm sure it will give Erica and Liza one more thing to clash over.

Enough.
I'm so over Ricky skulking around town trying to trip up Griffin and get information out of Kendall. At this point I'm not even sure what exactly he is trying to do. And why is he meeting with Diana out in the open? She introduced herself to Griffin as a reporter trying to get the scoop on Kendall and Zach. Wouldn't he be suspicious if he found them together? I'd like to see Ricky go and Diana stay though. She's seems a heck of a lot more interesting than the smarmy Reverend. This story is tired and needs to wrap up so we can get to the business of Kendall and Griffin getting together, because we all know it's going to happen. I know a lot of people don't want to see it, and while he's no Zach, I like Griffin and I like him and Kendall together. So let's just see some good old fashioned romance take place instead of all this boring, repetitive "intrigue." What do you think of the storyline? Vote in our All My Children Poll: Kendall's Storyline.

Other than being happy Angie returned, that's it for me this time around. What did you think of the goings on in Pine Valley last week? Feel free to share your thoughts below.