Interview: All My Children’s Cameron Mathison Talks Castle And Ryan 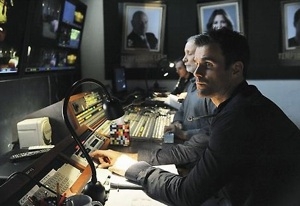 “I was so thrilled that they didn’t go with that cliché.”

On March 21, Cameron Mathison (Ryan) will appear on “Castle” in the soap opera themed episode entitled “One Life to Lose.” He will be joined by his All My Children co-star Rebecca Budig (Greenlee), as well as Corbin Bernsen (Father Todd, The Young and the Restless) and Jane Seymour. In the episode, the New York City detectives and writer Richard Castle (Nathan Fillion, ex-Joey, One Life to Live) must solve a murder on the set of a Daytime soap opera. Soaps.com recently spoke with Cameron about his stint on the ABC Primetime hit, as well as what’s going on in Pine Valley.

Soaps.com: “Castle” is a very soap friendly show so it seemed only a matter of time before an episode like this took place. How were you and Rebecca chosen for the episode?

Cameron Mathison: From what I understand, I think they were talking at one of ABC’s regular meetings where everybody kind of tells what’s happening on the shows – Daytime, Primetime – and I guess in one of the meetings, they were talking about this episode of “Castle” that’s coming up where there’s a murder mystery on the set of a soap opera. Brian Frons, who is in charge of ABC Daytime, heard this and said, ‘Well you have to use some of my people.’ So they kind of put it together in an ABC brainstorming session, as far as I understood. How Rebecca and I got chosen, I’m assuming that “Castle” had something to do with it. I’m not sure, but they asked us to be part of it.

Soaps.com: Do you watch “Castle?” Are you a fan of the show?

Cameron Mathison: I don’t watch a lot of television, unfortunately, because I don’t have time. I literally don’t have time to turn the TV on, but what I have seen of “Castle,” I absolutely love. I think they’re really talented. I think the show is fantastic. I’m really impressed with that show.

Soaps.com: You play Vince Bowers, the husband of the murder victim, as well as a director on the fictional soap “Temptation Lane.” What else can you tell us about your character?

Cameron Mathison: I’ll tell you this. When I was reading the script when I first got it, I was reading it expecting, totally expecting to see me playing the part of the shirtless guy or whatever. I couldn’t find that part and I was given my character name and in the script I saw I was playing the director. I was so thrilled that they didn’t go with that cliché. Anyway, the director is a great part. He’s a suspect for awhile. He’s the husband of the deceased, which is interesting. And I actually got to direct a soap scene within the “Castle” episode…It’s a really great scene at the end of the episode where they find the killer, where I’m literally directing a soap scene, which was really fun for me. I’m calling the shots. I’m directing Corbin and Rebecca and for me that was a real highlight.

Soaps.com: What is the extent of your character’s interaction with Rebecca’s character? Are you just her director or is there more to it?

Soaps.com: What was it like working on the set of “Castle?”

Cameron Mathison: Great. I mean, beyond great. The show is super cool. The show is such a quality show. All of the actors are amazing. It was just really cool. We’re all Canadian so we had that in common. It was pretty cool.

Soaps.com: It seems almost every week there’s a former or current soap actor guest starring on the show. Do you know where all their Daytime love stems from?

Cameron Mathison: I didn’t know that. That’s fantastic. Who else has been on?

Soaps.com: Vincent Irizarry's [David] been on. [I believe I misspoke. I was thinking of Rick Hearst (Whip, The Bold and the Beautiful ).] Melody Thomas Scott [Nikki, The Young and the Restless] has been on there. A lot of the regular cast has been on Daytime...

Cameron Mathison: That's really cool. I didn't know that. I don’t know where the Daytime love comes from other than from the top. Maybe from Castle [Nathan Fillion] himself.

Soaps.com: Yeah, possibly. He certainly seems to be a big supporter of the genre.

Soaps.com: Did you enjoy stepping out of Ryan's shoes to play someone new for awhile?

Cameron Mathison: I did. It was a breath of fresh air. I really enjoyed it. It was a real gift. I got a lot out of it.

Soaps.com: Is it safe to say your character on "Castle" is a lot different than Ryan?

Cameron Mathison: Yeah. It's definitely safe to say that. I don’t think Ryan would have an ongoing affair…I think this character is a bit little more edgy. A little bit more mysterious. Ryan is just a solid hero. This character was a fun departure.

Soaps.com: Speaking of Ryan, he's got a lot of baby mama drama going on. Where is his head at right now in regards to Madison [Stephanie Gatschet] and her baby?

Cameron Mathison: Has that aired yet on television?

Soaps.com: Yes. He just found out.

Cameron Mathison: I think it's exciting for him. Can you imagine what that would be like? I think there's a lot of mixed feelings about that. Being who he is, he's going to absolutely be there for the child and want to be involved and help out in any way he can. You know, he's got some mixed feelings about how it was handled and some of the lies being told. Of course, he doesn't even know the whole story yet. I think it's exciting. I think overall it's really exciting.

Soaps.com: Does Ryan still have feelings for Madison?

Cameron Mathison: I think so. I do. Although, he certainly didn't treat her terribly well. I think his intention was to treat her well, which didn’t turn out that great. Madison is a tough character not to have feelings for. She's super sweet, she's loyal and she's kind. She's kind of the underdog and Ryan likes to go for the underdog. Yeah, I think there's still feelings there.

Soaps.com: He seems to be fairly forgiving about Madison keeping the secret. Will he be as understanding when he finds out Greenlee knew all along the baby was his?

Cameron Mathison: I'd have to guess because I really don't know. I would say no. I would say that's a whole different level. I think it's understandable that Madison kept it a secret but once he finds out the love of his life has been keeping him in the dark it's not going to go over very well. But truthfully, I have no idea. Don't take it the wrong way. I really don't have any idea.

Soaps.com: Considering Ricky [Eddie Matos] is the one who killed Zach [Thorsten Kaye] and he is apparently not a minister, this means Greenlee and Ryan are not in fact married. Correct?

Cameron Mathison: That's what it would mean to me. Literally, like [how] you're going through it is what's been going on in my head. They really keep us in the dark these days because of how big our mouths are. When I heard this and I put it all together, I was like, 'Wait a minute!' I don't know how that's going to play out, but that's got to be it, right?

Soaps.com: Do you think Ryan and Greenlee should finally be married and happy, or do you like the twist that they think they're married but they're not?

Cameron Mathison: I like the twist. I think it's kind of neat. I don’t know how long it's going to go on for, but I like the twist and then once Ryan finds out Greenlee has been keeping the secret and he finds out that maybe that they're not…I mean I don't know what the time line is of all this, but it certainly has the potential to throw a wrench in things.

Video Promo: All My Children's...