Meet All My Children’s New Villain!! 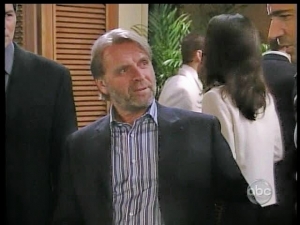 Hey there Pine Valley faithful, there is a new man in town with a very familiar last name! Soaps.com has learned that part of the mystery surrounding Jesse’s past will be revealed – thanks to the addition of a man with the last name. . .drumroll, please. . .Gardner!!!

All My Children has cast David Rasche in the role of Rob Gardner.

Many of you will remember another Gardner – Ray – who was Tad’s biological father. He wreaked havoc on Pine Valley back in the 1970s and 1980s. Among his many (and diabolical) sins: spousal abuse (against Opal), abandoning Tad in a park and raping Ruth Martin, who had adopted Tad.

Ray was stabbed by Billy Clyde Tuggle and eventually imprisoned on the rape charge but that wasn't the end of his reign of terror. He escaped prison (but was soon apprehended); he was eventually released from prison and made Opal give him a job. Ray built a bomb and when it accidentally blew up Ruth was injured. He built another bomb but when he realized it was endangering Jenny, grabbed it. It blew up and he was killed.

Rumor has it that Rob is directly involved in the mystery surrounding Jesse's "death" 20 years ago. Just how deep does this plot go? We'll have to wait and see - and enjoy the ride!

David Rasche is a very talented actor who has been in the business for many years. He got his start as a member of Chicago's Second City and later helped start Victory Gardens Theater in Chicago. Some of his notable roles were in shows like the retro-classic "Sledge Hammer" and the Woody Allen film "Manhattan." More recently Rasche has appeared in movies such as "The Sentinel" and "An Innocent Man" and has guest-starred on television shows such as "Monk" and the 9/11 made-for-television movie "United 93."

Soaps.com would like to welcome David to the show. We look forward to getting to know you!!