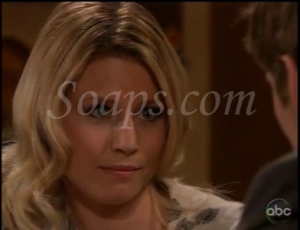 Going above and beyond. (Soaps.com)

Lori’s All My Children Weekly Wrap Up For March 7 – March 11:

Last week saw Pine Valley play host to a wedding, a reveal and not so fresh business ideas. A few other things happened as well, so let’s get to it.

Revolutionary ideas.
Colby has embraced her confession being posted online, much to her mother’s chagrin. It seems this will somehow lead her to enter Caleb and Erica’s storyline, because they’ve had the late-to-the-party idea to use social media. I can’t imagine Colby working for or helping Caleb and Cortlandt Electronics will go over well with her big brother JR, but the big issue here is, why isn’t a major corporation like CE already using social media? I sort of feel the same way about Madison’s not so original idea for a new product line – organic, non-toxic products for expectant mothers. I guess the expectant mother part is the niche they’re going for, but it seems like Fusion would, or should, already have an organic line of products. What happened to the nanotech idea? That seemed cutting edge, unlike these already mainstream concepts Pine Valley denizens are suddenly coming up with.

It’s official.
Despite flak from some family members on both sides, Tad and Cara got hitched. Tad seemed genuinely happy to be getting married and embraced the charade. He even introduced a few Mexican (I assumed) traditions into the ceremony to make it even more authentic. It seems he’s already falling for his brother’s ex-wife, or else he’s just happy to not be alone anymore. Either way, it’s nice to see Tad happy and I hope it continues.

Signs of distress.
Tad may have been happy to marry Cara, but Jake wasn't quite as thrilled with the event. He's doing a great job of conveying his lingering feelings for Cara, while still being in love with Amanda. Of course, Amanda was understandably jealous after discovering Jake didn’t get rid of Cara's wedding ring like he said he would. Even though she is struggling with her insecurity, she's smart enough to talk to her husband about it instead of just lashing out. Thankfully, she didn't give anything away when Trumbull questioned her while she got her drink on at ConFusion. It was interesting to see JR swoop in to save her from the fed though. I wonder if anything will come of his. I actually wouldn’t mind seeing her slip up with her former lover because they have pretty good chemistry. How do you think this will play out? Vote in our All My Children Poll: What Will Happen With Jake And Amanda?

Out of sight.
Speaking of JR, I hate how he's all of a sudden interested in being a family with Marissa again. Annie has been on the run for two seconds and it seems he's already forgotten her. Regardless of the Annie issue, I think it would be a mistake to put JR back with Marissa. They were a snooze fest the first time around and going back for seconds would just be more of the same. JR needs a much more dynamic character to play off of. Hopefully they will find someone new who can go toe to toe with him like Annie did before she went off the deep end.

Ryan clues in.
After their blink and you missed it trip to Boston, Ryan brought a cramping Madison to the hospital. Of course he overheard how far along in her pregnancy she really was and deduced that he was the father – not Scott. I'd like to see him get really angry over it and treat Madison with hostility, which seems like the reaction most men would have considering the huge secret she's been keeping from him. But of course, Ryan, being Ryan, will probably take pity on her and come to her rescue in some way. I hope Scott isn't counted out though and continues to ingratiate himself into Madison's life. He might want to keep an eye on David though, who is starting to get a bit suspicious of his arrangement with Greenlee.

Aside from really wanting Ricky to be exposed so he can stop stalking Kendall and the writers can stop forcing the same dialogue on us every day, that's it for me this time around. What did you think of last week's "All My Children?" Feel free to share your thoughts below.

Video Promo: All My Children's...