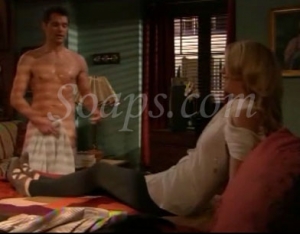 Lori’s All My Children Weekly Wrap Up For February 28 – March 4:

Pine Valley was full of new developments, surprises and humor last week. There was a lot going on, mostly good, some iffy, so let’s get to it.

Personal space invader.
I really wish Kendall would open her eyes and realize how off Ricky is. He constantly walks into her house unannounced, answers her phone, badgers her to reveal personal information and basically stalks her. I know she’s still grieving, but her creepy dude radar should still be intact, especially since she thinks someone killed her husband. I’m glad she’s got Griffin to watch out for her, but I wish she wasn’t being written as such a victim. I would rather see her realize what Ricky is up to and try and out fox him, even if it is with Griffin or some other man’s help.

Starting out as friends.
As Bianca dealt with her custody issues with Reese, Marissa was one step ahead of her predicting how it would play out. Marissa has been right so far about Reese wanting the kids and she’s being a good friend and lawyer to Bianca, but I wonder if it will lead to more than that. Marissa doesn’t have much of a purpose on the show right now and since she is handling Bianca’s case instead of Bianca’s more experienced Uncle Jack, I have to wonder if they are testing out their chemistry. What would you like to see happen? Tell us in our All My Children Poll: Bianca’s Love Life.

Gone viral.
Upset because Damon and Liza slept together and Asher knew about it, Colby told her story to the world when she accidentally posted her video confession online. This should create quite the stir to all those involved, but since I don’t much like her or Asher and Damon’s not around anymore, it lessens the drama for me. Unless of course it leads to a whole new story, then I might be interested. I wonder if Colby will find out Tad also knew about the illicit one night stand and kept it from her.

Meet the parents.
Tad's got other things to worry about than Colby's love life though considering his own love life is being put on hold (or just beginning, depending on how things turn out) so he can protect Cara by marrying her. He told his family what the deal was, but when faced with Cara's disapproving mother, he and the rest of the concerned parties remained mum. Why wouldn't they just explain it to her? It seems like she would be understanding and maybe even grateful to Tad if she knew the truth behind the marriage. Although, watching Tad try, but fail, to charm "Mrs. C." was pretty entertaining. I also enjoyed the Q&A session held at the Martin home when Amanda and Jake fired questions at Cara and Tad about each other. I wish that would have lasted longer actually.

Getting an eyeful.
Scott surprised Madison when he walked out of the shower with nothing on but a towel, which was barely on itself. Who knew Scott was hiding that body under his conservative wardrobe? According to Stephanie Gatschet (Madison) on Twitter, "To answer all who have asked, yes Danny Cosgrove [Scott] was completely 'nekked' under that towel. The shock on my face was an honest reaction!" That makes me appreciate the scene even more.

Deal with the devil.
Even though Greenlee told Ryan she believed David was telling them the truth about Annie's phone calls to him, she was still suspicious of her ex-husband. When she confronted him, she realized she was right and David had an ulterior motive: wanting to be reinstated at the hospital. She of course offered to help make that happen if he in turn helped them find Emma. I'm liking this development because David is still being David, but in a less in-your-face kind of way and Ryan will probably be none too pleased when he learns what his wife (or so he thinks) has done.

Working it out.
I liked everything Jack and Erica last week. They are a couple in crisis, acting like one, not like a typical over the top dramatic soap couple. Usually one of them would have slept with someone else by now or done some other irreparable deed. Instead, Jack has decided to move out, but not entirely end things. Erica then made her grand gesture by surprising him in his hotel room and they seemed to make up, at least for the time being. It remains to be seen if their hotel romp will fix things, but I'm looking forward to finding out if it does.

That's it for me this week. What did you think of last week's All My Children? Feel free to share your thoughts below.

All My Children's Stephanie Gatschet...