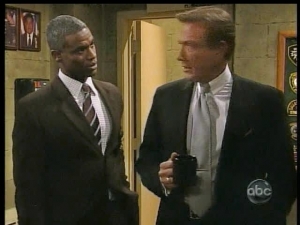 After several months of a nu-Derek, Charles Parnell has returned to the role he left in the fall of 2007 to act in an off-Broadway play! Today’s return was a fun one: Derek and Jack got to watch Erica begin (yet another) crash and burn course.

So, what has Charles been up to for the past few months? I thought we would update you on his schedule, and that of Jerome Preston Bates, who filled in for Charles during the run of his play.

Charles left All My Children last fall to appear in the off-Broadway production of "The Overwhelming", which focuses on the aftermath of the 1994 slaughter of 800,000 Tutsis in the African Republic of Rwanda. The play follows one American family who travels to Rwanda just before the attacks and follows what happens to them during the aftermath. Charles played an evil government official whose power continues to grow after the slaughter.

In addition to the play, Charles has also been at work on a film called "We Pedal Uphill". The film is a dramedy, focusing on life in America after the 9/11 terrorist attacks. It is currently in post-production. We'll keep you updated on when the film's release schedule.

Now let's chat about Jerome Preston Bates, who filled Charles' shoes while he was away. The actor chatted with Soaps.com back in October after taking over the role, saying he was looking forward to seeing more of Derek in Pine Valley. Since leaving Pine Valley he has been at work on a film called "The Narrows". The film is based on Tim McLoughlin's novel called "The Old Country" and has finished production. We don't have a release date for the film but we'll keep you updated on that, too.

With Charles' return will Derek become more featured on the show? We'll have to wait and see but with a court battle in Jack's and Erica's future, it seems that they will be spending a lot more time at the PVPD. And let's not forget about supposedly-dead Jesse Hubbard, who used to work in the department. It could be that Derek will become pulled into Jesse's world in the coming months as well.

Meet All My Children's New Villain!!