Dastardly deeds.
It was confirmed by Diana last week that Ricky is not in fact a minister, which means Ryan and Greenlee are not married. I imagine that will make it easier for Ryan to walk away when he finds out Greenlee didn't tell him he was the father of Madison's baby. I thought maybe Ricky could be redeemed or maybe he had underlying motives for working with Diana, but the more he declares he killed Zach for the casino money, the more it seems that won't happen. It was pretty comical to watch Ricky type one paragraph of Zach's letter on his phone and then print it from his phone on Kendall's printer. First of all, if it's even possible, I don't think it works that easily. Secondly, he typed one paragraph. How did he make it look like a whole page that seamlessly fit back into the entire letter? Thirdly, as Cowboys Fan pointed out in the message boards, the font would have been totally different: "I mean, did Zach type the letter from Ricky's phone? I don't think he did."

Scrambling for cash.
If Madison's medical bills are so expensive because her doctor is out of network, then why doesn't she get a doctor that is in network? That seems like an easy fix and something she should have checked out from the beginning considering she is, and has been, so broke. I did like her and Scott both signing up for a sleep study for the money though. That seemed like a realistic thing people looking for extra money would do. Although, them sharing a studio apartment is a bit ridiculous. I imagine they could find a two bedroom together fairly cheaply in small town Pine Valley. Or even a one bedroom with a pull out couch.

Aside from marveling over the teleportation device they must have used to get to Montreal so quickly, I don't really have much to say about Ryan and JR's search for Annie, but feel free to add your thoughts about it below, along with anything else that stood out to you about last week's "All My Children." Don't forget to vote in our All My Children Poll: Best Reveal. 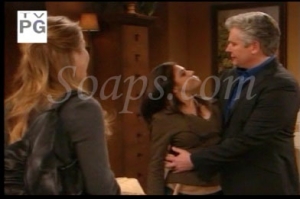 Credit: Too close for comfort. (Soaps.com)

Lori’s All My Children Weekly Wrap Up For February 21 – February 25:

Last week, the residents of Pine Valley were rocked with revelations and surprises. It was a pretty good week filled with tons of drama, so let’s get to it.

Heading to the chapel.
In order to save Cara from getting deported, Tad announced they were getting married. Even though it’s a classic soap move, I really like this development and hope the cliché continues with Cara and Tad genuinely falling in love. They have great chemistry and she’s a lot more fun when she’s around him as compared to how angsty she is with Jake. I’m totally on team Cad, or Tara, or whatever you want to call them. I loved Liza calling them out about the fake marriage. It would have been ridiculous had Liza just bought it and Tad and Cara’s bumbling attempts at looking like a real couple were pretty amusing.

You did what?
As if dealing with the fact that his brother was going to marry his ex-wife wasn’t enough, Jake learned his current wife turned Cara in to immigration. That did not go over well. I’m sure it will take him awhile to forgive her, but I hope they work it out in the end because I’m a big fan of Jake and Amanda’s.

Like mother, like daughter.
Colby also had one mother of a revelation when she put the pieces together and figured out Liza slept with Damon. The scenes between Liza and Colby were great and it was quite possibly the first time I actually liked Colby. Probably because she didn’t go too over the top and acted more subdued in her anger than usual. While the mother/daughter stuff was compelling, I couldn’t help but wonder how much more of an impact the reveal would have had if Damon were around. On a side note, I was kind of surprised that Colby didn’t know about Tad and Marian. I thought that whole scandal was common knowledge. 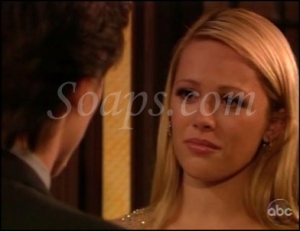 All My Children Saturday Teaser Poll: What Does Colby Do?

All My Children Weekly Video Promo: Ricky Gets Ruthless