Not your typical minister.
I'm so happy Ricky has another reason for being around other than just to console Kendall. Apparently, he's responsible for Zach's death, which I like because otherwise he's just another boring character. I've stated in a previous blog, I'm not a fan of ministers as love interests so this has been a welcome twist for me. But is he really a minister, or just posing as one? Could this mean Greenlee and Ryan aren't really married? That remains to be seen, but I do wish they would explore Griffin's immediate dislike of Ricky more though. Does he just sense something is off with him? Or does he not believe in religion? Since they've sort of hinted at it, why not let Griffin express his disdain and have him actually debate Ricky on it? Soaps are often criticized for not being diverse enough and the religion issue is no exception. Allowing more than just the usual Christian viewpoint on Daytime would be pretty interesting. What do you think about the turn this story took? Vote in our All My Children Poll: What About Ricky?

Odds and ends.
I loved Jack walking away from Erica at Krystal's after the wedding telling her he wanted to continue his drama-free night. Nice one Jackson.

Kendall seemed pretty non-pulsed by the fact that Annie kidnapped Emma. I know she's got a lot going on, but she changed subjects with Greenlee like they were talking about a family she wasn't intimately familiar with.

Cara's attachment to her wedding ring is a bit much. I agree with Amanda and want her to take it off, but Amanda calling immigration on her afterwards was a bit drastic.

How could Ryan believe Scott was the father of Madison's baby so easily? She didn’t really know Scott before he went to prison and he just got out two minutes ago. Ryan is so gullible.

That's it for me this time around. What did you think of last week's All My Children? Feel free to share your thoughts below. 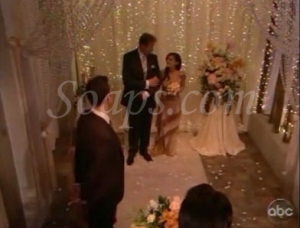 Lori’s All My Children Weekly Wrap Up For February 14 – February 18:

Last week’s All My Children gave us a major reveal, a send off and a ho-hum wedding. Other things happened as well, so let’s get to it.

Not exactly the wedding of the year.
Was it just me or was Ryan and Greenlee’s wedding one of the least romantic events you’ve witnessed on a soap? I’m not their biggest fan anyway, but I just didn’t feel any of the emotion they were trying so hard to convey during their vows. Between Ryan learning Madison was pregnant right before the ceremony, the non-existent wedding guests, the rushed feel of it and Annie kidnapping Emma right after the ceremony, the love got lost in the mix.

Bye, bye Annie.
For all the complaining people have done about soaps becoming too violent or too storyline dictated, I will take a mob war on General Hospital or another tornado in Pine Valley over having to watch another woman succumb to psychosis because of a man. I about lost it when Annie basically told JR she was unraveling because he didn’t love her enough. Why can’t women on soaps remain strong and independent? It’s as if when they don’t know what else to do with a female character, they just turn them crazy and man-obsessed. It was fun to watch Annie’s antics for a while, but I have never been, nor will I ever be a fan of these types of storylines.

Real emotion.
Bianca opened up to Kendall about the state of her relationship with Reese. It was nice to see her portrayer, Christina Bennett Lind, actually get a chance to act when Bianca told her sister how lonely she was without her wife. Things don’t look good for the first lesbian couple of Daytime, as Bianca has hired Marissa to represent her in the divorce, but I certainly hope this leads to a real storyline for her. 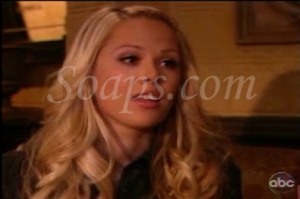 All My Children Saturday Teaser Poll: Who Tells Colby The Truth?

Former All My Children Star Leven Rambin On One Tree Hill. (Updated) 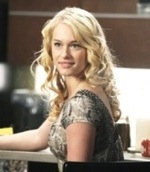