Interviews: All My Children’s Susan Lucci And Hot In Cleveland’s Wendie Malick

As for Wendie, who got her first TV acting job as an under five player on "All My Children" many years ago, she recounted her experience playing on a soap again: "It's such a different muscle to use. As Susan said, it's a very similar process, but it's just in warp speed here. They just shoot such an enormous volume of stuff every day, so you have to just get in there and get on that train that's just flying by. You just have to really be on your game and be prepared because they need to get through so much material every day, but really nice people. They gave me some fun stuff to do."

While neither actress feels their TV rivalry is over, because their characters have "unfinished business," they were asked if viewers need to be fans of both shows in order to enjoy the current crossover. "I don't think so at all, but I think they will be fans of both shows once they watch these shows," Susan offered. "They already should be fans of both shows because they're just good shows. It's very groundbreaking. Talk about thinking out of the box. It's the first time that networks have done a crossover between shows. ABC and TV Land have nothing to do with each other, so the shows are crossing over and it's the first time there's been a crossover between nighttime and Daytime. So on every level it's been so creative and so well done. I think the fans are going to have a great time watching both shows and they'll have the best time if they do watch both shows because they'll see the whole build up from watching "Hot in Cleveland" on Wednesday February 16 and then the following week on Wednesday February 23 and the following day Thursday February 24 on "All My Children." 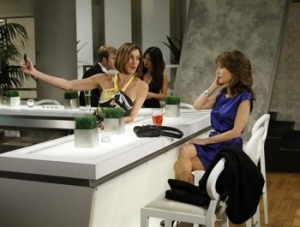 Starting this week, All My Children begins its crossover with Hot in Cleveland. If you’re already a fan of the TV Land sitcom, you know that the character Victoria Chase, played by Wendie Malick, has a fierce rivalry with actress Susan Lucci, who appeared on the first season ender as an exaggerated, diva-esque version of herself. Continuing their feud, Susan Lucci will once again appear on “Hot in Cleveland” on February 16 and 23, along with Michael E. Knight (Tad) and Darnell Williams (Jesse). The following week, Wendie Malick will appear as her character Victoria Chase playing the character Gertie Stein on “All My Children.”

Confused? You aren’t the only one, so Soaps.com got a little clarification when we visited the All My Children set and heard from the actresses themselves.

First of all, Susan Lucci explained, “On “Hot in Cleveland” I’m never Erica Kane. I’m called Susan Lucci no matter how rotten I behave.” She continued, “On “All My Children” I can never be Susan Lucci, because that would break the fourth wall of Pine Valley. So, I’m only Erica Kane.”

As for Wendie Malick, who admitted, “I think it’s harder to explain than it is to do,” she plays former soap star Victoria Chase on “Hot in Cleveland,” who is hired by “All My Children” to play housekeeper Gertie Stein. In the episodes, Gertie is hired by Erica, but gets fired and later turns up as a ConFusion bartender. As Susan explained above, since she is only Erica Kane in Pine Valley, there will be no recognition of the feud between Erica and Victoria on “All My Children.”

For the “Hot in Cleveland” portion of the crossover, which airs on TV Land at 10.00 PM EST, Wendie set up, “[Susan] came on our show, and this is where it gets nutty, but we did an “All My Children” episode on “Hot in Cleveland.” In that show I thought I [as Victoria] was being offered this wonderful star turn in this death scene, where [Susan] then in fact sabotaged it to the degree where she took away my fabulous dying speech. My monologue. My soliloquy. Not only did she do that, but she had my head wrapped in bandages, eventually even my mouth, so that I couldn’t even make a noise.”

During the “Hot in Cleveland” episode, Michael E. Knight and Darnell Williams will be seen on the re-created “All My Children” set running lines. It will also be revealed that Michael had a fling with Jane Leeves’ “Hot in Cleveland” character Joy. 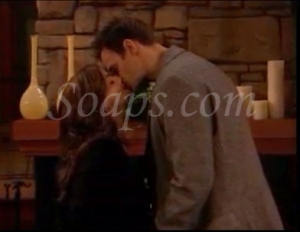 All My Children Saturday Teaser Poll: Who Breaks Up?

All My Children Video Promo: Griffin Checks In On Cara