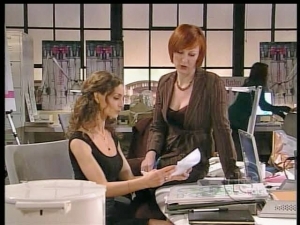 Just in time for Valentine’s Day, Kendall Hart Slater, played by Alicia Minshew, is releasing her
first romance novel! We’ve seen a bit about the book on All My Children in the past few weeks, but did you know the book is actually real?

Well, it is, and you can buy it starting February 5!

Here is a bit of backstory on the book:

Remember when Zach and Greenlee were trapped in the bomb shelter and a therapist told Kendall that writing things down might help her deal with the stress? Well, Kendall took that to heart and began writing a story. This book is the result of that work – and wouldn’t have even gotten this far if Greenlee didn’t take it from Kendall’s bag, read it and send it to an editor friend.

Okay, okay, these are fictional people who did fictional things so how can it be a real book? Because The Powers That Be at ABC Daytime made it so; they’ve created an entire book written by Kendall Hart Slater.

And from the reviews, the book is actually very good. And very hot!

The roman a clef is a romantic suspense novel which follows Avery Wilkins, a 30 year old woman at the prime of her career. She has her own cosmetics firm (sound familiar?), a slew of boyfriends (sound even more familiar?), and friends who may or may not have her best interests at heart (you guessed it, Kendall changed the names of people in her own life to write the book!). Oh, and a birth mother who wants a real relationship with Avery! Sounds like a book that will keep us on our toes, right?

You can purchase the book here or visit your favorite book store. The book releases on February 5, 2008!

This book is a must have for Pine Valley fans, and would make a great Valentine's Day gift. While we're on the subject of great Valentine's gifts, ABC Daytime has put together a great new CD of love songs featuring some of our favorite AMC, <One Life To Live and General Hospital stars!

Susan Lucci, Bobbie Eakes and David Canary are among the stars singing some favorite love songs from the past!

You can purchase the CD here.