Interview: Lindsay Hartley And Ricky Paull Goldin Talk All My Children With Soaps.com

As for what direction storylines end up going in, Ricky mused, "I think in our medium it depends a lot, I mean they obviously have an idea of what they want to write and the way they want the story to go, or they think they want it to go. Since we're going so fast and we're the only medium that does this, basically live to taped television, I think a lot of it matters on the two people that end up on screen together. I'm going to speak as if you're not in the room [referring to Lindsay]. We have a great thing, Chrishell [and I]. It's always been a blast. It's always a charge. I can just tell you as an actor, with someone else stepping in the building that comes with this character, it's also very charged and very, it's all the things we say as actors – the stakes are very high. The caliber of the acting I am getting to work with with Lindsay Hartley is amazing. She's an amazing actor. You don’t usually all get it in one basket, but she is that. Even if they had something planned, or they didn’t have something planned, or they had a long range plan, I think a lot of the plan goes out the window until you see how characters get along or how they don't get along. I'm just speaking for me - that's exciting for me."

Aside from just playing their characters in present day, Ricky and Lindsay have also played out their characters' past in flashbacks, something Ricky is a big fan of. "Imagine, that's kind of being able to press fast forward or rewind on your life," he said. "As actors, I'll speak for myself, it ramped it up real fast because there's history."

Lindsay chimed in, "There's all this stuff that comes with them. The flashbacks got to show the light stuff and bonding experience, which is cool because usually when you're on a soap opera, you meet a guy…I'd bump into him and I'd be like, 'Eww. You're a jerk.' And he'd be like, 'You're a b word' and then all of a sudden we'd be like all hot and heavy in like two shows."

"Instead," Ricky pointed out, "you have a couple of characters steeped in history and I think that audiences, please God, will respond to a couple who have history. And I played a lot of stuff before Lindsay got here, when I first got here, of all my backstory and I shared that with who? The audience. And now a lot of it's coming true and they get to see...at least they're getting to see, like, what that was all about."

Back to the issue of the two women in Jake's life, Ricky summed up his character's predicament: "My dad [Paul Goldin] was a hypnotist. He helped a lot of people in the world with his hypnotism. One of the things he used to say to me was: If you and I are a couple and you and/or I die, you fall off a cliff or whatever, you will go somewhere else. You move to Australia - you'll fall in love in Australia. You think meet your soul mate, or you do meet your soul mate. In fact he'd say, we have more than one soul mate in his life. We have many. And soul mates are not necessarily the people you're supposed to spend the rest of your life with. They're actually like a bumper in a pinball machine where you get with your soul mate and they put you in the direction that you're meant to end up going. Whether it's with them or without them. So he strongly believed that we have many soul mates. So imagine if, for me, [as Jake] if two of my soul mates are in the same place at the same time. Now I've got a dilemma."

What will Jake do about that dilemma? You'll have to watch to see, but in the meantime, feel free to share your thoughts on what you would like to see happen below. 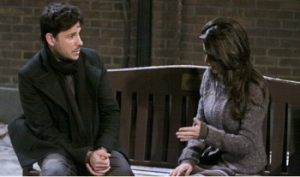 Credit: What will Jake do? (Soaps.com)

“And now everything is turned upside down for her.”

We’ve already heard from Alicia Minshew regarding what happens to Kendall during the ambulance crash storyline after Soaps.com stopped by the All My Children set. While we were there, we also spoke with Lindsay Hartley (Cara) and Ricky Paull Goldin (Jake) to find out what’s going on with their alter egos.

When we asked Lindsay what her character’s involvement in the storyline was, she responded, “Oh, Lord. I think there are a couple of things going on. First, with my brother [Griffin, Jordi Vilasuso], obviously he’s in the accident. He’s working on saving Kendall’s life and I realize for the first time since, I mean, forever basically, it looks like he’s falling for a woman and usually he’s just always had the chicks. That’s kind of my thing with him, is always to tease him about being a player and I finally see that he’s broken that rule and he’s crossed the line that he never crossed. That he promised he’d never cross.”

“On a romantic level,” she continued, “as far as Jake and Cara go…it’s hard for her to be around him because she’s not only in love with him, but she doesn’t want him to know at all. So when they work together it obviously causes some issues with her. She thinks she covers it and handles it really well because he’s married and he’s happy and he has a son. She’s not going to mess that up for him. She’s going to stick to her way of thinking, her throughline, which is: Get me out of this country and go back to where she belongs. But in the midst of all this, the ring that she wears around her neck is exposed and Jake finds it and now everything is turned upside down for her.”

Things may be turned upside down for her in regards to Jake, but she has also struck up a friendship with his brother Tad [Michael E. Knight]. When asked about their relationship, Lindsay responded, “It’s her only connection to Jake. What she wishes she could say to Jake she says to [Tad] and he doesn’t judge her at all for it. So she’s just like, this is who I am all the way around and she basically tells him [she’s] in love with Jake and will always love him. That’s it. So yeah, for her she just kind of through him, connects with Jake.”

Now that she’s back in his life, is Cara a threat to Jake’s marriage to Amanda [Chrishell Stause]? Ricky opined, “I think that any ex is a threat to a marriage, especially when it wasn’t your decision to get out of the marriage and you don’t quite understand and your ex-spouse, your partner, your best friend in the world has five different stories as to why. If we can ever find out the real story, get to the bottom of it, you know, it might move the goal posts. You just have to wait and see.” 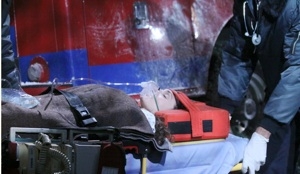 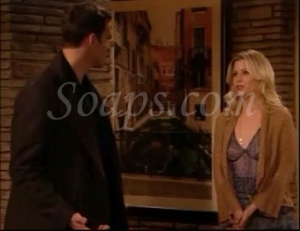