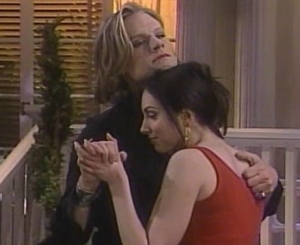 Could All My Children be headed for a five-peat? Is that even a word? Well if not, may it will become a word this year! For the fifth year in a row the show has been nominated for a GLAAD (Gay and Lesbian Alliance Against Defamation) Media Award! AMC has won the award for the Daytime Drama category for the last four years!

The GLAAD Media Awards recognize mainstream media for the accurate, fair and inclusive representation of the lesbian, gay, bisexual and transgender community.

The trans-gender storyline involving Zarf/Zoe and the romantic relationship brewing between Zoe and Bianca has been a hot-button topic for the past year. The storyline was very popular among fans who rooted for Zoe as she began the transition from physically male to physically female. Since Zoe left Pine Valley to return to Europe in the spring of 2007, fans have missed her presence. A few cameo appearances by Eden Riegel just haven't been enough to satisfy the Pine Valley faithful.

This week rumors broke that Bianca might make a long-term return to Pine Valley sooner rather than later, which has fans buzzing about another Zoe storyline, too.

This year, AMC will compete against As The World Turns, which has a hot gay storyline of its own going.

The GLAAD Media Awards ceremonies will be held in several cities beginning in March. Here is that list: in New York on March 17, 2008 at the Marriott Marquis; in South Florida at the Seminole Hard Rock Hotel & Casino on April 12; in Los Angeles on April 26 at the Kodak Theatre; and in San Francisco on May 10 at the San Francisco Marriott. The awards will also be broadcast on television, though that date has not been announced.