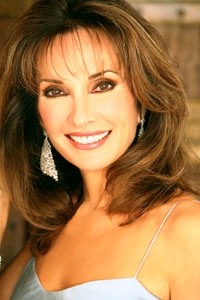 Susan Lucci has been a staple on daytime television since the 1970s, but she has also graced several Broadway stages and appeared in several made-for-television movies. Her career-long hard work will be honored by the American Federation of Television and Radio Artists on Monday, January 28th, at the AFTRA Media and Entertainment Excellence Awards!

TV-newsman Sam Donaldson and recording artist Maureen McGovern will also be honored at the event. The awards will honor the lifetime achievements of the three superstars.

Susan Lucci has one of the most famous faces in television history and has had soap fans spellbound since her debut as Pine Valley’s Erica Kane in 1970.

In addition to her television role as daytime's biggest diva, she has launched clothing and jewelry lines as well as skin care and perfume lines. At one time Susan had the dubious distinction of being the most-nominated-without-winning actress at the Daytime Emmy Awards. She won her Emmy, finally, in 1999. She also has her own star on the Hollywood Walk of Fame.

Though best known for her role on AMC, Susan has appeared in Broadway productions such as "Annie Get Your Gun" and has become a great cabaret performer. Each year at the Broadway Cares/Equity Fights AIDS event, she performs with her castmates in the singing, dancing and comedy event.

The AFTRA awards will be held at Gotham Hall in New York City.