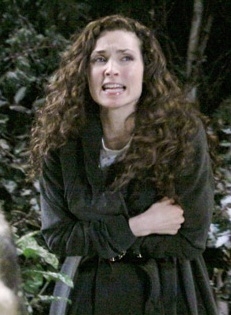 Soaps.com recently visited the set of All My Children as they taped scenes from the ambulance crash storyline that kicks off next week. We caught up with Alicia Minshew (clad in a hospital gown, fashionably accented with boots befitting Kendall, of course) who previewed what’s to come.

After shooting 17 scenes lying in the ambulance, where she had to cry a lot, Alicia shared turning on the waterworks isn’t that difficult. “It’s funny, now that I’ve played the character for so long, I don’t really have to work myself up at all,” she responded when asked how she cries so easily. “I really just, I feel so connected to what she’s gone through as a person and losing her husband is something I think can resonate with anybody, as an extremely sad thing. So I really just pay attention to what she’s gone through, if it’s something with her kids or her husband. It’s very easy for me to go there now. Maybe it wasn’t years ago when I first started, but now I just feel so connected to what’s happened to her. Just today in the ambulance, they had a scene where Kendall thinks she sees Zach (Thorsten Kaye) and they said, ‘Okay, Zach is standing over you.’ And I just went [makes sobbing sound] and started crying. You know, because I’m just so connected to the character and to him. So, I think now, it’s just kind of coming naturally to me. I’m an emotional person anyway. It’s not too hard for me.”

Emotions get stirred up this time around when Kendall collapses while confronting David [Vincent Irizarry] in jail. David apparently gets out to help her to the hospital, where he promptly gets into an argument with Ryan (Cameron Mathison). This of course knocks something loose in Kendall’s memory. “She remembers seeing David and Ryan fight. So hearing them fight triggered everything and she just remembered that night just from hearing them and it all came back to her,” she explained. “And of course Griffin [Jordi Vilasuso] walks in and she’s freaking out, ‘I did it. I shot David!'”

Kendall is understandably shaken and feels the need to find Erica (Susan Lucci), which sets off a dangerous chain of events. “I’m anxious to tell my mother that I remember that I shot David,” she sets up. “So she’s drugged up and grabs her coat and her boots and wanders around looking for her mother and then collapses. She has heart problems again. Griffin finds her, calls an ambulance, rushes to the hospital, the roads are icy and the ambulance crashes. So it’s Cara, Jake and Griffin. The three of them are with Kendall and it’s not good.”

While things are precarious for the foursome in the ambulance, another Pine Valley resident becomes involved as well. "Annie's hallucinating. You should see Melissa Claire Egan," Alicia beamed. "I love this girl. She's so good at playing crazy. Not everybody can do that. She does it beautifully. Anyway, that's my kudos to Melissa. She's hallucinating and she's driving and of course she hits the ambulance and it's kind of her fault. Ooh, I can blame her too. [laughs] So, she causes that accident, aside from the slippery roads and stuff, and I guess they get into a crash too. Annie's driving on the road with her little girl. I don't know if they crash, but she hits the ambulance and [she flees]."

That's right. Crazy Annie hits the ambulance and then takes off so no one knows she was involved, but that's all we can say at this point. You can be sure there's more drama to come though.

Of course the accident isn't the only thing going on in Kendall's life though. There's also the issue of the men circling her. As for Minister Ricky (Eddie Matos), Alicia mused, "He's great. She has become great friends with him. He's safe. He's the man that did Zach's memorial so he knows how much Kendall loves Zach. I think she finds comfort in him, you know, he's helped her grieve, go through the grieving process. Sure he's cute, but I think she finds comfort in him and she enjoys his company because he's safe and sweet. I think it's interesting now because I'm noticing sort of a jealousy between Griffin and Ricky. Not only jealousy, but the two of them aren't crazy about each other, so whenever one walks in with the other around Kendall it's almost like they're a little protective, like, 'Hmm? What are you doing with her,' kind of thing. That could be interesting."

Interesting, sure, but as Soaps.com pointed out, the fans won't accept Kendall with anyone too soon after Zach's death. "Nor will I," Alicia quickly agreed. "As much as I think these two guys are great and there's absolute potential with both, I still want to see her grieve in different ways and move on with her life of course, but remember her husband."

Speaking of Zach, how does Alicia feel now that his portrayer Thorsten Kaye is no longer on the show? "First of all, I deeply miss Thorsten," she sighed. "I was missing him a lot today because I was crying over him and picturing him. I miss him because he was my scene partner for six years, something like that, and he's my friend. The good thing is we talk and we're all great friends. It's not that he's not in my life anymore, but I miss working with him because I loved working with him. However, it's great to work with new people too because there's something really fresh about it. Working with Eddie who plays Ricky and Jordi who plays Griffin – they're great. They're both gorgeous. They're both sweet. They're both really hard workers. And they're both totally different. Different from Thorsten, different from anybody I've worked with. I kind of like working with new people because it gives me something different to do. It's not always the same thing, it's something totally different than what I've ever done. I'm having fun. I adore them both, so I’m like, 'Hey bring 'em on! I'll work with everybody.' I like it. I’m definitely having fun. You know, if I can't work with my Thorsten. I'm having fun with both of them. I think I’m very lucky. I'm a lucky girl. I mean look at these guys I get to work with."

To find out what happens next, go to Alicia Minshew Previews Storyline (Part Two).

All My Children's Jill Larson On...