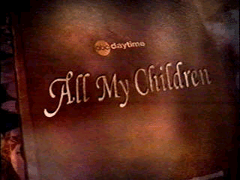 We may not see them often, but the crew of our favorite soaps – directors, writers, producers and even camera operators – are some of the hardest working in the industry. Which is why they are recognized by their peers for their hard work every day. The Director’s Guild of America has announced the nominees for Outstanding Directorial Achievement in Television – and All My Children director Casey Childs is one of the nominees!

Casey was nominated for his work on episode # 9669. This is Casey’s third nomination (he was previously nominated in 2007 and 2001) for the DGA Awards.

The DGA had a lot of drama to choose from during the 2007 season. The year got of with a bang - literally - as the deaths attributed to the Satin Slayer were investigated. Next came the accidental killing of beloved character Dixie (she was poisoned by mistake; the Satin Slayer was targeting Babe). Before the town could recover from Dixie's death, Babe was presumed dead and the town gathered for a double funeral. Though those were some of the most devastating scenes for many fans, the drama wasn't over yet! JR had an especially hard time dealing with his mother's death and the secret he carried about Krystal's baby.

There were also several dramatic exits in 2007: Jamie decided it was time to strike out on his own. The scenes between Justin Bruening, ex-Jamie, Alexa Havins, ex-Babe and Jacob Young, JR were very compelling.

And then came the coup de grace: Greenlee returned and tried to break up Annie and Ryan and in the process put Kendall, Spike and Kendall's unborn son (Ian) in danger. The path of Greenlee's redemption was hard for many fans to watch, but the emotions put on the screen by Sabine Singh, ex-Greenlee and Alicia Minshew, Kendall brought tears to many viewer's eyes (mine included!).

This year the awards ceremony will be held at the Hyatt Century Plaza Hotel in Los Angeles, California on January 26, 2008. We will keep you updated on how Casey fares this year.

Soaps.com would like to congratulate Casey for all of the hard work and dedication shown in the past year. Because of your vision Pine Valley was a great place to be in 2007!