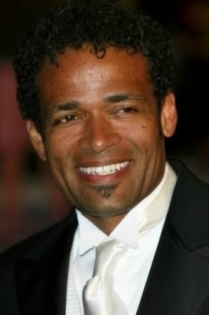 Will Dre welcome his father? (Soaps.com)

Hey, All My Children fans, a veteran – and certified hunk!! – actor is headed to Pine Valley later this month! Soaps.com has learned that Mario Van Peebles has been cast in the role of Erica’s new love interest Samuel Woods.

We learned earlier this week that Dre, a member of the hip-hop crew that Sean and Colby have been spending time with, has been on the run from his family.

Dre mentioned that they want him to follow in his father's footsteps. Dre said his dad is a senatorial candidate for Pennsylvania and he isn't at all interested in politics. Well, Samuel Woods is Dre's father, and when he comes to Pine Valley looking for his son, he'll run right in to Erica.

Mario is no stranger to acting; he is an experienced television and film actor and director. Mario's first soap role was on One Life To Live when he played Doc Gilmore in the early 1980s. From daytime television he moved to primetime roles on shows such as "The Cosby Show", "L.A. Law" and "Highlander III". He recently finished work on "Sharpshooter", "Multiple Sarcasms" and "The Uniter". His film debut came at the age of 13 when he was cast in his father's film "Sweet Sweetback's Baadasssss Song" in 1971.

From the director's chair, Mario has worked on films such as "Posse", "The First Amendment Project: Poetic License" and "The Uniter".

He has been nominated for awards with the Director's Guild of America, Black Reel and the NAACP Image Awards, among others. Of his ten nominations, Mario has won six different awards.

Mario's first airdate is set for January 29th. He will be a guest on Erica's talk show "New Beginnings" and at first the two won't like one another. But we know how those hate-at-first-sight meetings go, don't we fans? Romantic sparks won't be far away!

Soaps.com would like to congratulate Mario on landing the role of Samuel, and we look forward to seeing a lot more of you as the role progresses!

Rumor Has It Two Hunks Will Leave...