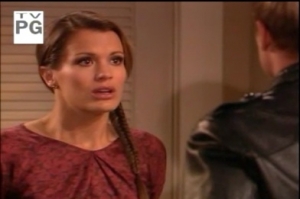 Last week was shortened due to the Christmas holiday. I hope everyone enjoyed their festivities, or just had a great long weekend. There wasn’t much joy or celebrating in Pine Valley though, as Kendall continued to grieve, Annie further stewed over her secret relationship with JR and Greenlee discovered Madison was pregnant. While it was a brief week, a lot happened, so let’s get to it…

Dirty little secret.
JR is playing a dangerous game with Annie by continuing to keep their relationship a secret. The fact that he just stared at her with his mouth open when she told him she loved him did not help matters either. I was happy Amanda suggested to Annie that she might be the one who constantly sabotages her own happiness, but telling her to just trust things will work out wasn’t the best advice. I would have preferred if Amanda suggested Annie respect herself a little more and make better choices for herself and Emma. That said, I really do enjoy Annie and JR’s chemistry and I don’t understand why they are forcing JR back into Marissa’s orbit. I hope the writers don’t go down that path again because they are boring together and have no chemistry. Maybe things will be different with nuMarissa, but JR and Annie are the money couple right now, so they should capitalize on that.

The secret’s out.
Greenlee hacked into the hospital computer system and discovered Madison was pregnant. Upon being confronted about her bun in the oven, Madison called Greenlee out on how illegal it was to look at her private information. Greenlee hilariously responded that she didn’t care and then lit into Madison about being knocked up with Ryan’s baby, which was over-the-top harsh. Madison got pregnant while she was dating Ryan. After Greenlee rejected him. She didn’t set out to trap him in hopes he would leave Greenlee for her, so Greens needs to take it down a notch. Much like Ryan needs to stop trying to make himself feel better by trying to save every woman he comes into contact with. It’s tiresome.

Anvil.
Griffin told Bianca he doesn't understand how people fall in love so hard it destroys them when they lose it. Bianca deduced he had never been in love, which in a soap, can only mean he will for the first time ever allow a woman into his heart. It will presumably be Kendall since they keep butting heads, but as I've said before, I really hope the writers allow a lot of distance from Zach's death before that happens. What do you think? Vote in our All My Children Poll: Kendall and Griffin.

Taking its toll.
Kendall is really falling apart and she seems to also be having trouble with her memory lately. Either it's just her grief, or something else is going on to make her so forgetful. Keep an eye on the All My Children Spoilers to find out more. At least she can be comforted by the Christmas presents Zach so conveniently bought and wrapped before his plane crash a month ago. He sure was prepared. It's a nice way to pull at the heartstrings and give characters some closure, but receiving a gift from the deceased is such a soap cliché, that it's almost as expected as that character returning from the dead.

Better as friends.
Caleb and Erica shared a few close moments last week as they discussed her murder indictment and Cortlandt Electronics being returned to him. I'm assuming these scenes are supposed to highlight their growing feelings and the tension between them, but I just don't feel it. I'm liking the friendship Caleb, Erica and Jack are forming together and would rather see more of that than see them become a love triangle. Also, Jack and Erica share the heat Erica and Caleb are missing, so it seems pointless for them to try and sell Caleb as a real threat to Jack.

That's it for me this time around. What did you think of all the goings on in Pine Valley? Feel free to share your thoughts below.

2010 All My Children Year In Review