All My Children: Rebecca Budig Wins Skating With The Stars 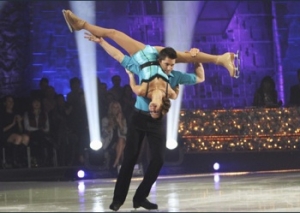 After just five weeks, the first season of Skating With the Stars has already produced a winner. The person earning that distinction is none other than All My Children‘s Rebecca Budig (Greenlee).

Beating out five other competitors, Rebecca was far and away the best skater of the competition, which included Motley Crue’s Vince Neil, former The Young and the Restless guest star Sean Young, “Sonny With a Chance” star Brandon Mychal Smith, The Real Housewives of New York City’s Bethenny Frankel and Olympic skier Jonny Moseley. Rebecca never landed below second place during the competition, so it came as no surprise that she ended up in the finals, which pitted her against Bethenny Frankel.

After weeks of rigorous training, in between working in Pine Valley full time, and injuring her wrist, Rebecca performed an exciting and complicated routine for the finale. After combining the viewer votes with Rebecca’s perfect score of 60 out of 60, for a program she received a 50 for previously in the season, she and her professional partner Fred Palascak were handed the golden skates trophy.

Soaps.com congratulates Rebecca and Fred on winning Skating With the Stars.

To find out what other actors are up to outside of Pine Valley, check out the All My Children News Room. We invite you to join Soaps.com on Twitter @soapoperafan and "like" Soaps.com on Facebook to dish on All My Children, all the other soap operas, Glee, Grey’s Anatomy and Vampire Diaries!

All My Children Poll: Cara's...