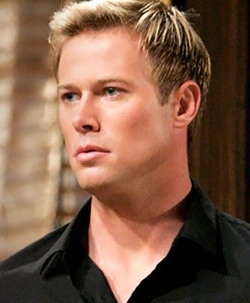 “It really helps to establish the Chandler family and the clan.”

On All My Children, JR Chandler is currently trying to charm Marissa (Brittany Allen) into agreeing to joint custody of AJ, while keeping his relationship with Annie (Melissa Claire Egan) a secret. He has also taken over as head of the Chandler family and will soon have to deal with a recast Scott (Daniel Cosgrove), who is sure to complicate things even more once he gets out of prison. There’s a lot going on in JR’s life right now, so we got to the bottom of it with his portrayer Jacob Young.

Soaps.com: What do you think of JR’s plan to win Marissa over in terms of AJ?

Jacob Young: I think he means well in the best way. Obviously he doesn’t want to be separated from his son. His son’s everything and the fact that she’s filing for full custody, I think it really made him have to think about what’s most important to him and obviously that’s AJ. So by him doing this, it’s really for AJ’s sake. He doesn’t want to be away from him. He’s done some bad things, but for the most part he needs to be with his son. AJ’s real mother is dead and I know [Marissa] is the adopted mother, but I think he should be staying in the father’s life and I think JR needs to give her the opportunity to have joint custody. I think now with this new plan he may be successful with making sure there’s joint custody.

Soaps.com: Annie doesn’t seem to be too thrilled. Will JR be able to keep her from totally spinning out of control?

Jacob Young: Well, you know, Annie’s unpredictable. She’s a ticking bomb at times, so to keep her under control is an understatement. I don’t think he really has full control over her. He’s caught up with the situation, but she can’t understand it. He’s trying, he’s making an attempt at all of it.

Soaps.com: Could Annie and JR actually work as a couple?

Jacob Young: I think that they could. I don’t think it would last, but as a real couple, yeah, they definitely give each other what they need at this moment. I don’t think JR is so caught up in the love anymore. Love is not the thing he’s doing. It’s more infatuation. He likes to have a woman by his side, but obviously as the years have gone on, he’s more interested in taking care of the company, the corporation, his father’s legacy and bringing his son into the same fold, what his father taught him. I think it could be anyone there, but JR loves a good sparring partner.

Soaps.com: How do you think JR is doing as the head of the Chandler family?

Jacob Young: Did Adam ever do great in that role? [chuckles] As a father, as a husband? I think JR is doing everything he can. He watched his father make his moves, ins and outs and fall down and get back up and I think JR is doing the same exact thing. If he’s succeeding, it would be a little at a time. Other than that, he’s still human. He makes mistakes and he falls.

Soaps.com: Will Tad ever be able to talk him down from following in Adam’s footsteps?

Jacob Young: I think he’ll have moments because JR still has his mother’s heart. He’s got Dixie’s soul. He carries that with him. He is not his father. He’s his father in the way of corporation, but emotionally he’s more like his mother. He is sensitive and Tad does have effect on him in that way because Tad and him have a relationship that’s like no other. Yes, he might, but I don’t think JR will ever give up what the family means to him. It’s just been embedded into him now. It’s like using your right or left hand you know? It’s just that natural to him.

Soaps.com: How is it working with Daniel Cosgrove, who is taking over as Scott Chandler?

Jacob Young: Daniel and I have just had an awesome, awesome time working together. He's a true pleasure to have back on All My Children and to have him directly involved in my storyline is just a blast every day. We're just pouring out some really awesome work together, I think. Some of the best I've encountered so far, that I've done as JR. We just have a good dichotomy together and we work off each other incredibly well. Whatever happens with JR and ladies, this family, Scott and him are going to reflect on family again. We’ll have that battle. It's going to be an inner thing. He'll go work someplace else maybe, but I think they'll ultimately always be in each other's lives, which I really like. It really helps to establish the Chandler family and the clan.

Soaps.com: What else can you preview that's coming up for JR?

Jacob Young: And it's not good. We all know the direction she goes when she gets restless.

Soaps.com: Does JR still have feelings for Marissa?

Jacob Young: Yeah, JR definitely has feelings for Marissa. He's so good at trying to convince people of things that aren't necessarily what he's feeling, but in the process of convincing them, he ends up convincing himself. He just starts to believe it and he knows it. He's like, well I wouldn't have done it if it wasn't the truth. He's being nice to Marissa in order to make sure he ends up with AJ, you know he's convincing himself of that. And he starts going, wow, she wasn't so bad after all; I wish we weren't in this place. He starts having that rekindled thing. Whether it goes anywhere or not, he softens to her.

Soaps.com: What are your plans for the holidays?

Jacob Young: My in-laws are coming into town here in Los Angeles. My father Larry Stewart and Carol Stewart and Larry Jr. Stewart from my wife's family's side are all joining us here for the holidays in California. It's the first time they've really made the trek out here. It's nice to have them here. We've decorated the house up. It's all very Christmas-y. Santa Claus Lane we like to call it.

Soaps.com: Are you enjoying being back on the West Coast?

Jacob Young: It's good. It's good. I think it's good for a lot of reasons. Number one of course being the weather, but second of all I think the show has really been rejuvenated in a lot of ways. Whether a storyline is always great or not, but I think as far as the overall feeling of the show and getting some new cast members and West Coast people, everything has come together and I'm real happy about the move to tell you the truth.

Soaps.com: Are you missing the dynamic between Adam and JR?

Jacob Young: Every day. It's difficult any time you say goodbye. I miss it every day.

All My Children Poll: Cara's...